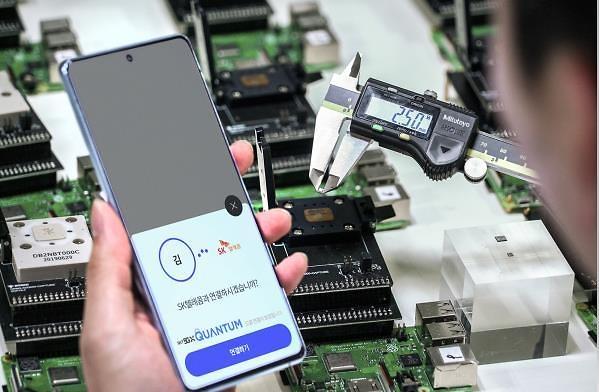 
SEOUL -- For the first time in the world, a new 5G smartphone from Samsung Electronics will be installed with a quantum random number generator presented by SK Telecom, a top mobile carrier in South Korea.

SKT said in a statement on Thursday that Galaxy A Quantum would be "the world’s first 5G smartphone equipped with a quantum random number generator (QRNG)" in cooperation with Samsung and ID Quantique, a Swiss company that provides quantum key distribution systems and quantum safe network encryption.

SKT said that the release of the Galaxy A Quantum carries significant meaning as it enables individual consumers to experience the benefits of quantum security technologies in their everyday lives. SKT will open pre-order for the Galaxy A Quantum from May 15 ahead of its official launch on May 22 in South Korea. The new phone comes with a price tag of 649,000 won ($528).

"With the release of the Galaxy A Quantum, we are opening a new chapter in the history of the quantum security industry," said Ryu Young-sang, who heads SKT's MNO Business. "We will offer differentiated security solutions to enable our customers to use ICT services in a safe and secure manner in the hyper-connected era of 5G."

Quantum encrypted data is basically a single-use asset that can only be accessed once. If someone tries to hijack the data that has been accessed, the hacker would only get information that is mangled beyond repair.

Galaxy A Quantum is a 5G smartphone with a 6.7-inch display, 8GB RAM, quad-lens rear camera and a large-sized 4,500mAh battery. It has the world's smallest random quantum key generator chipset developed by SKT that is 6.25 square millimeters (0.009 square inches).

For almost a decade, SKT has been developing security technology for mobile communications. The company has won approval from the Geneva-based ITU Telecommunication Standardization Sector (ITU-T) in September last year after SKT proposed standardizing methods of making pure random numbers that are unpredictable and patternless by utilizing quantum technologies.

SKT's method is being used as a basis for generating passwords in a variety of security areas, especially to enhance the security of internet of things, self-driving cars and smart cities based on a 5G network. SKT has applied its quantum random number generator to 5G and LTE subscriber authentication servers in 2019.

The QRNG chipset allows smartphone holders to use selected services in a safe and secure manner by generating true random numbers that cannot be hacked, SKT said, adding that customers would benefit from advanced protection while making payments at offline affiliate stores. An encrypted "quantum wallet" will be created when users store their personal certificates such as pass, license, transcript and insurance claim documents) in Initial.