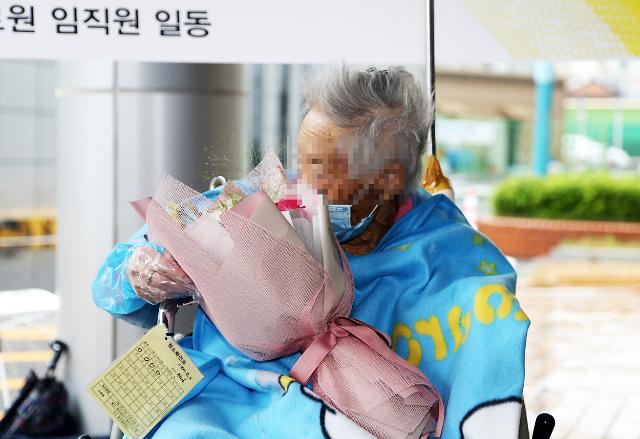 A 104-year-old COVID-19 patient takes a bouquet of flowers as she leaves Pohang Medical Center on May 15. [Yonhap News Photo]

SEOUL -- A 104-year-old grandmother, the oldest among South Korea's COVID-19 patients, was discharged after a 67-day battle against the deadly virus that killed 260 people. Doctors and nurses congratulated her discharge with a bouquet of flowers.

A ceremony was held at noon on Friday at Pohang Medical Center in the southeastern industrial port of Pohang to send off the grandmother identified by her family name, Choi, who was infected with COVID-19 on March 8. She had lived in a nursing home in Gyeongsan since 2012.

Since Choi was transferred to the hospital in Pohang, she had experienced critical moments several times because of her age and underlying disease. She was able to survive thanks to dedicated efforts by medical personnel who took turns around the clock, devoting all their energy to treatment, because Choi could not move alone.

An ambulance carried the wheelchair-bound grandmother back to her nursing home, watched by medical personnel who held up a banner reading "Congratulations on your discharge. Stay healthy!"

Choi became the 291st COVID-19 patient to be discharged, with 31 others still under treatment, the hospital said in a statement. "I was worried about her condition change, but I'm glad the grandmother was discharged in good health," Kim Ki-soo, director of the hospital's internal medicine department, told Yonhap News.