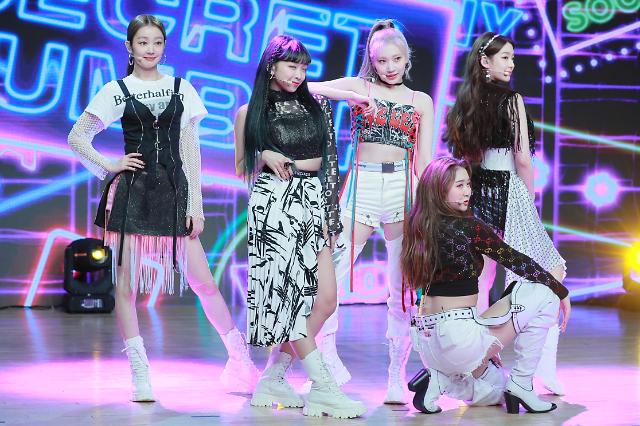 SEOUL -- Instead of being shy, SECRET NUMBER revealed ambitions to wrest the Rookie of the Year award as the rookie five-member multi-national girl band made its debut with the first single album "Who Dis?"

The band under Vine Entertainment begins official activities at 6:00 p.m. on May 19. Based on their fluent foreign language and versatile talents, SECRET NUMBER members hope to build a fan base beyond South Korea.

"Since the special charm of members is a global team, they were born and raised in different places and have different cultures, but they will be able to create synergy," Lea said in a showcase event, adding that members can show many talents such as makeup, exercise, dance and cooking, she said. "We will show a variety of charms," she said, disclosing her dream of receiving the Rookie of the Year award.

The debut single contains the confident charm of members who want to live in a unique way in their own style. The title track of the same name is a collaboration between Melanie Fontana, who composed BTS' "Boy With Luv," Michel "Lindgren" Schulz, the husband of Fontana, and local composer Shark.