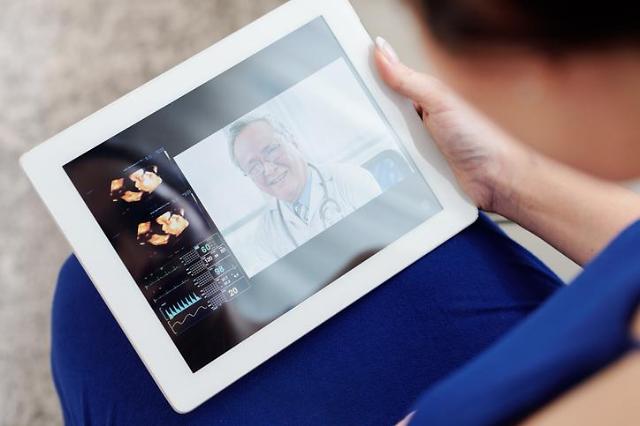 SEOUL -- A coronavirus pandemic rekindled debate over the introduction of telehealth in South Korea well known for its ultra-fast mobile telecom network that opened a connected society, on a new initiative by President Moon Jae-in to nurture "untact" medical services as a new growth engine in the post-COVID-19 era.

Moon has praised the medical community for helping South Korea earn global recognition as a model country in quarantine, suggesting that South Korea should intensively foster non-face-to-face medical services or telemedicine, which is used in a more limited sense to describe remote clinical services, such as diagnosis and monitoring.

Telehealth is a service via electronic information and telecom technologies that allow long-distance contact, care, advice and monitoring. Clinicians discuss a case over video conference, a robotic surgery through remote access, physical therapy via digital monitoring instruments and home monitoring through the continuous sending of patient health data.

The starting point of discussion was a government move to temporarily authorize telephone counseling and "untact' drug prescription by medical institutions from February 24. So far, some 260,000 patients have used the temporary service, prompting policymakers to open social discussions on the introduction of telehealth.

However, Moon's initiative triggered an unexpected backlash from doctors who have insisted home medicine would be effective only when hospitals have an advanced system and new technologies.

The Korea Medical Association denounced any attempt to "politically exploit the COVID-19 situation as a grave threat to public health" and urged members to stop telephone counseling and prescription, which it said were introduced temporarily "in good faith."

"We cannot help but ask whether it is time for the government and politicians to worry about 'post-COVID-19' as if it's over," the association said in a statement, adding the strength of South Korea's medical care is doctors who have risked their lives in the face of a national crisis.

The association warned that telemedicine would eventually lead to the collapse of small and medium-sized hospitals as it cannot guarantee safety due to ambiguous legal responsibility.

Since South Korea introduced its first pilot program for telehealth in 2000, any attempt to revise a related medical law has failed to win parliamentary approval mainly due to strong opposition from doctors. The current social atmosphere seems different as many people fearing the transmission of contagious viruses are reluctant to meet doctors at hospitals.

A telemedicine pilot project organized by the Ministry of Science and ICT as well as the Korea Internet & Security Agency (KISA) will be carried out by Gangwon Province, a forested and mountainous province east of Seoul. The province will establish a telemedicine platform that manages chronic patients based on blockchain technology.

A consortium of private companies led by Iconloop, a blockchain technology provider, would launch the joint development of a platform by December, based on DID (decentralized identity) which is a new type of encrypted identifier that normally uses public keys to establish secure communication channels.

The platform can safely manage personal data and such as individual blood pressure and blood sugar while analyzing them to predict and manage diseases in advance. Connected to a hospital system in the future, the province aims to maintain a constant chronic disease management system from self-care to hospital care.

In a rapidly aging society, health care for chronic patients is a major concern for local governments. Gangwon has a large elderly population and low access to medical care for geographical reasons. The province has been designated as a special zone for digital healthcare.

"Blockchain is a key technology that helps manage sensitive personal medical data more transparently and safely," said Iconloop CEO Kim Jong-hyup. "We expect this project to be the first start of the medical MyData business, which allows individuals to directly manage and control sensitive medical information."

Lee Sang-yi, a professor at Jeju National University School of Medicine, came up with a compromise proposal, saying people with mobility difficulties should be allowed to receive medical services at home. "This is the future health care system centered on the community."

A new health care system is possible thanks to information and communications technology, said Lee, who co-heads Welfare State Society, a civic organization. He suggested that small hospitals in charge of primary health care and nursing hospitals should provide telemedicine for those who need community care and elderly people in nursing facilities.