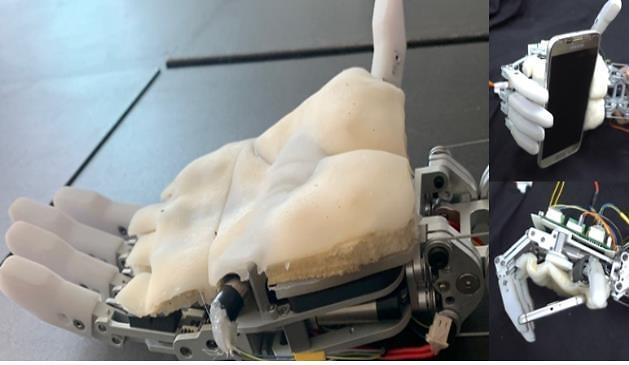 [Courtesy of the Korea Advanced Institute of Science & Technology ]

SEOUL -- Researchers at a state research institute have developed an artificial skin inspired by a human palm that would help robotic arms and prosthetics to firmly grasp objects such as a smartphone while maintaining the manipulability of joints.

The researchers used a porous latex structure to represent soft fat tissues and tough latex walls to mimic septa walls that divide cavities or structures into small ones. The artificial skin wall holds the entire artificial structure in the tensile direction for tension and integrity. A thin layer of silicon was used as the cover sheet to provide a smooth surface and surface tension.

"We plan to develop a robotic hand with an optimized skin structure so that it can pick up tiny objects like small bolts or fragile objects such as eggs," Park said.

Cooperative robots, also known as cobots, are gradually being adopted at factories and small-sized workshops to work alongside humans in close proximity using manipulators to operate devices and pick up objects. The global market for cobots is expected to reach $10.1 billion by 2025, according to market research firm Grand View Research.

Because their robot hands lack delicate controls and firm grip, cobots are mainly assigned to simple jobs such as lifting up and sorting parcel boxes or placing products that come out of production lines.