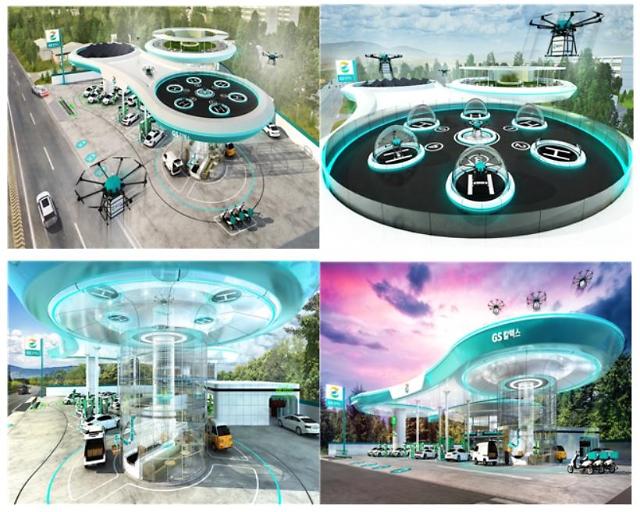 
SEOUL -- GS Caltex, a major South Korean refiner, demonstrated the use of delivery drones to carry lunchboxes and drinks from a gas station that served as the last-mile logistics hub in a government-led project to utilize unmanned aerial vehicles in the delivery of parcels and daily necessities to remote areas with limited accessibility.

In a demonstration watched by government officials, researchers and GS Caltex officials on Monday, two drones with a maximum payload of about five kilograms (11 pounds) took off at a GS Caltex gas station in the southern resort island of Jeju. One carried lunch boxes to students at an elementary school about 750 meters (0.46 miles) away while the second drone flew to a nearby guest house about 1.3 kilometers away. Each delivery run took four to five minutes.

"This demonstration is a test of a high-reliability drone delivery service platform with a 98 percent success rate of delivery mission," the Ministry of Trade, Industry and Energy said in a statement. The ministry called for the early commercialization of drone delivery services in response to the new trend of increasing demands for non-face-to-face services amid a coronavirus pandemic.

The demonstration was part of a 35.2 billion won ($29.2 million) project to develop technology and logistics infrastructure so that drones can be adopted by logistics services to deliver parcels. The ministry said it would expand the drone delivery system to urban and suburban areas by easing regulations. Currently, the law strictly forbids the operation of drones in populated areas for safety and security.

"If drone delivery services are popularized, everyday necessities and safety products can be easily delivered to hard-to-reach places such as islands and mountainous areas," a trade ministry official said.

Through the demonstration, GS Caltex revealed its future plan to utilize a nationwide network of gas stations as the hub of a total logistics system including drone delivery, car-sharing, parcel delivery services by vehicles and hydrogen fuel and electricity charging services for eco-friendly cars.

"Gas stations are easy for logistics vehicles to enter and not only they have enough spaces to store goods but it is also suitable for becoming a logistics hub," GS Caltex Heo Se-hong said. He said his company would continue to develop various logistics services using gas stations in the future, including drone delivery.

In April, the refiner used a drone to collect samples of oil from an oil tanker before a ship harbored in a dock to unload cargo. Normally, inspectors using small boats climb onto hulking tankers to collect samples before docking. The oil sample-collecting drone will be commercialized this year.

South Korea with a web of 4G and 5G mobile communications has tested delivery drones in urban areas and hard-to-reach places. The demand for quick drone parcel deliveries is high among villagers that live on islands that dot the southwestern and southern coasts as logistics companies charge more to deliver to islands and deliveries can only be made when seas are calm.

The South Korean postal service is an organization that is earnestly honing drone-related technologies. In November 2017, Korea Post delivered a parcel weighing about eight kilograms to a remote island in the southern coastal county of Goheung. Masks were delivered to help villagers stop the spread of COVID-19.

The utilization of delivery drones in urban areas is also actively researched. In 2016, a food delivery service company demonstrated an auto-piloting drone in the western port city of Incheon to deliver a Korean rice cake stew dish to a customer about 0.8 kilometers away.

For safety reasons, some companies have turned to use drones on wheels for their delivery services. Woowa Brothers, the operator of food delivery service Baedal Minjok, has successfully carried out a test run of Dilly, a six-wheeled autonomous drone at a university campus in eastern Seoul to pick up food from restaurants to customers waiting at designated pick-up spots.