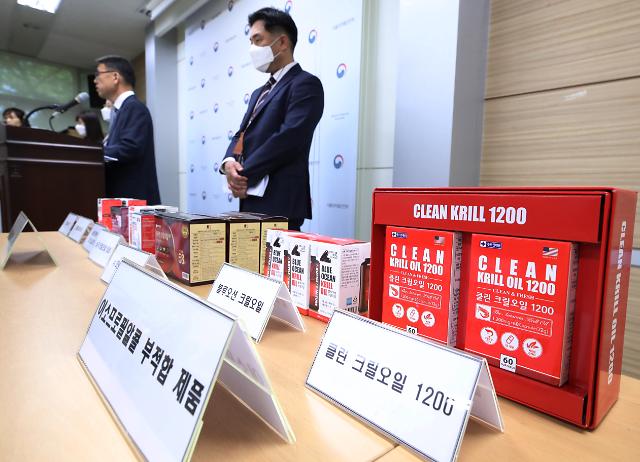 SEOUL -- South Korea's public health watchdog will check the safety of imported raw materials for krill oil after finding that some products sold in the domestic market contained banned substances or an excessive level of solvents. The watchdog urged consumers not to be deceived by false or hyped advertising that krill oil enhances immunity.

Krill oil, which is an extract prepared from a species of Antarctic krill, contains omega-3 fatty acids which are thought to decrease swelling, lower cholesterol, and make blood platelets less sticky. However, there is limited scientific research to support the efficacy of krill oil, and studies have shown toxic residues in Antarctic krill.

Krill oil products have gained popularity since South Korea was hit by a coronavirus epidemic this year, mainly due to their enticing advertisement. As a sales gimmick, some importers and distributors claimed that their products were found to have enhanced immunity.

Out of 42 krill oil products on the domestic market, the Ministry of Food and Drug Safety suspended 12 and request administrative action for punishment. Five products contained an excessive level of ethoxyquin, which is used for antioxidant processing, while seven contained banned solvents such as ethyl acetate, isopropyl alcohol and methyl alcohol or a high level of permissible solvents such as hexane and acetone.

"Krill oil is not a health-functioning food but a general food, so we urge you not to be misled by false or hyped advertising without medical or scientific grounds such as disease prevention and treatment effects," the ministry said in a statement, adding that in order to secure the safety of krill oil products, the government will strengthen safety management and inspect imported raw materials.