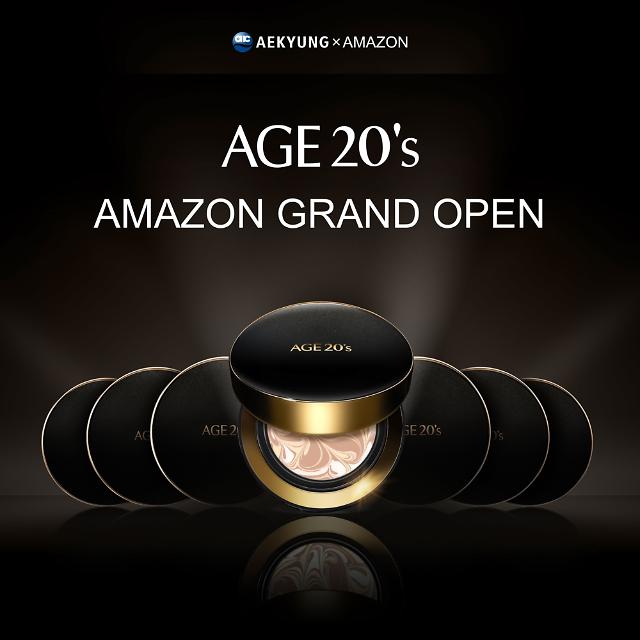 SEOUL -- In an effort to attract young American consumers in their 20s and 30s and expand a global base of customers, Aekyung, a major hygiene and cosmetics maker in South Korea, opened a brand store in Amazon, the world's largest online shopping mall, with its cosmetics brand called "AGE 20's."

Aekyung said in a statement on Monday that the company would increase the brand recognition of AGE 20's among American consumers through Amazon. Aekyung's AGE 20's cosmetics products including an essence cover powder & pact, primer, tone-up booster and other makeup products have acquired approval from the U.S. Food and Drugs Administration.

The company would introduce other brands such as LUNA, a makeup brand targeting consumers in their 20s, and Kerasys, a hair-care brand, in the U.S. market. Aekyung said that AGE 20's products are gaining popularity not only in South Korea but in other countries such as China and Southeast Asia.

The growing influence of K-pop and K-drama has boosted U.S. consumers' interest in South Korean cosmetics products. The boom of K-beauty products began when BB (Beauty Balm) Cream was first introduced in the U.S. market. BB Cream is a cosmetics product that was designed to serve as an all-in-one solution of foundation, moisturizer and sunscreen. BB Cream garnered popularity among young consumers for its ability to cover blemishes such as acne and age spots.

South Korean anti-aging and whitening products are popular mainly in China and Southeast Asian countries, with K-beauty color makeup including eye shadows and lipsticks extending its reach to overseas markets.