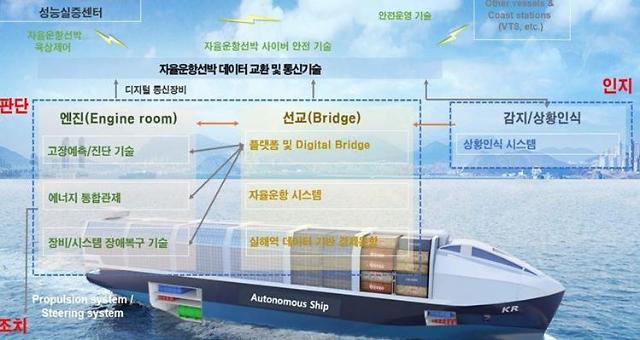 [Courtesy of the Ministry of Trade, Industry and Energy]


SEOUL -- In an effort to preempt the market for unmanned commercial ships, South Korea launched an integrated government task force to develop core technologies for autonomous ships and prepare a foundation for early commercialization through systematic demonstration, using new technologies such as artificial intelligence, big data and internet of things.

The task force formed by the Ministry of Trade, Industry and Energy and the Ministry of Maritime Affairs and Fisheries will be established at the state-run Korea Research Institute of Ships & Ocean Engineering based in the central city of Daejeon. Some 160 billion won ($132 million) will be spent for six years from this year on developing the second level of technologies for coastal navigation and the third level for ocean navigation

The task force aims to develop an intelligent navigation system, an engine automation system, a communication system and a land operation system while providing a foundation for commercialization through the integrated demonstration of ships that can be operated internationally. The performance demonstration center will be built in the southeastern port city of Ulsan to secure a track record by testing a 25-meter ship and a mid-sized merchant ship.

Kang Kyung-sung, a director in charge of policy planning at the Ministry of Trade, Industry and Energy, said in a statement that the project is aimed at preparing for a paradigm shift in shipbuilding and shipping markets. "We will promote the development of technologies related to completely unmanned autonomous ships."

To ensure that shipping is cleaner and greener, the International Maritime Organization (IMO) has adopted mandatory energy-efficiency measures to reduce emissions of greenhouse gases from ships. Innovative solutions are needed to reduce CO2 emissions from ships.

Smart shipping can be divided into unmanned ships ruled by an operator from a control center onshore and autonomous ships that use a computer on board that takes decisions about the route, speed, fuel consumption, maintenance and even mooring in the harbor. The U.N. maritime safety agency has identified four degrees of autonomy:

-- Degree one: Ships with automated processes and decision support. Seafarers are on board to operate and control shipboard systems and functions. Some operations may be automated and at times be unsupervised but with seafarers on board ready to take control.

-- Degree two: Remotely controlled ships with seafarers on board. They are controlled and operated from another location. Seafarers are available on board to take control and to operate shipboard systems and functions.

-- Degree four: Fully autonomous ships. The operating system is able to make decisions and determine actions by itself.

In January, Hyundai Heavy Industries released a smart ship management system that efficiently manages the fuel consumption of ships. The system allows human managers to work remotely from a control tower to monitor the operation of ships and engines in real-time and find optimized routes.

In early June, LIG Nex 1, a major defense contractor in South Korea, teamed up with the state-funded Korea Institute for Advancement of Technology (KIAT) to commercialize a smart ship platform and an autonomous coastguard patrol boat.