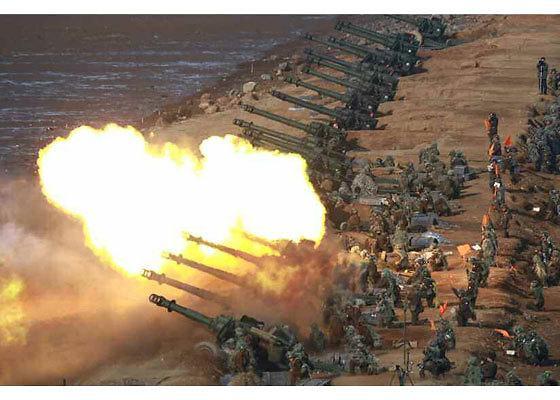 
SEOUL -- To cope with sudden cross-border strikes, commanders at South Korea's front-line military camps can make a quick decision and share real-time information with nearby units and make a fast decision for an optimal data-based attack recommended by an advanced command and control system that improved the operational performance of artillery firepower.

The upgraded Army Tactical Command Information System (ATCIS), or C41, consists of 201 servers, 4,022 terminals, 458 security hardware units, 82 mobile computer vehicles, 169 monitors and plenty of software for network-centric warfare that applied network information to effectively connect all elements that can be grasped in combat spaces and transform them into combat forces.

An upgraded C41 system has been developed with pure domestic technology with the injection of some 130 billion won ($108 million) invested from December 2018 and deployed at a front-line military unit, according to the Defense Acquisition Program Administration (DAPA), a state body controlled by the Defense Ministry.

The system features new functions such as the automatic calculation of combat power and the recommendation of an optimal method of attack that allows commanders to greatly strengthen their ability to command and control in real time while maneuvering. It also implemented rapid mobility by installing a mobile computer room equipped with servers, networks, and security equipment into a small tactical vehicle.

"With this deployment, the military has greatly strengthened its response capabilities to maximize the effectiveness of existing forces," DAPA head Wang Jung-hong said in a statement. He said the new C41 system would be deployed at other military units.

A sensor system such as radars and a "shooter" system such as missiles were linked in real time. Commanders can hold a video conference and share operational situations with nearby units. it is designed as a web method that allows users to operate systems with access to portals.

South Korea has stepped up efforts to develop an upgraded C41 system for fast and efficient data-driven decision making and processing to cope with sudden enemy strikes such as the shelling of Yeonpyong Island near the inter-Korean maritime border in November 2010 that killed four South Koreans and triggered concerns of a full-scale conflict.