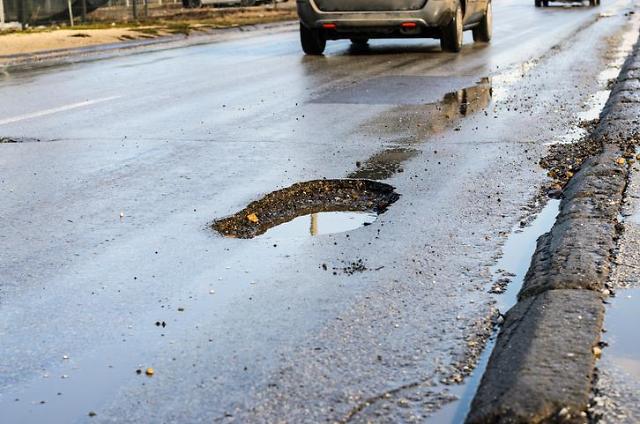 SEOUL -- An unusually long rainy season and heavy downpours caused by global climate change created numerous road potholes in South Korea this summer, damaging cars or leading to fatal accidents. A new digitalized government manual to manage potholes will be drawn out for the automatic dispatch of repair teams.

The Ministry of Land, Infrastructure and Transport said it would digitalize its existing pothole management system to effectively manage and monitor potholes on the surface of roads. A pothole is a depression created on a road surface by traffic that removes pieces of asphalt pavement. Sometimes internal corrosion by heavy rain or other factors creates potholes that damage cars and sometimes cause accidents.

The ministry said it has created a work management manual for digitalizing pothole management systems for local government officials in charge of road management. The new manual includes the measuring standard of potholes as well as detailed explanations on methods to fix them. Road workers can use a dedicated tablet PC to take pictures, record locations and automatically dispatch repair teams.

Ministry data showed that 3,874 potholes were reported in 2019, down 19.9 percent from a year ago, and 119 damage suits. Potholes become a critical threat to autonomous vehicles or cars with semi-autonomous driving features as sensors can easily miss potholes ahead. About 356.7 billion won ($301 million) has been spent every year to repair potholes. Comparable figures were not given this year, but South Korea was battered by the record-long rainy season of 54 days this summer that left about 50 people dead or missing.