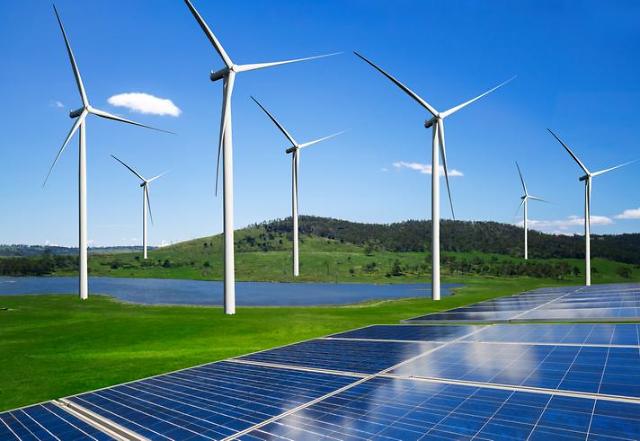 SEOUL -- The development of reclaimed land, which was created by the world's longest man-made sea barrier on South Korea's west coast a decade ago, has been slow, failing to attract useful investments. Environmental groups have expressed concern about a waste of taxpayers' money and pollution.

A consortium of SK Group units including SK E&S and SK Broadband judged that Saemangeum near the southwestern port city of Gunsan is worthy of investment, based on a fresh project unveiled by President Moon Jae-in in 2018 to build the world's largest solar power complex and a large-scale offshore wind farm.

The consortium came up with an investment of two trillion won ($1.7 billion) by 2029, including one trillion won to build submarine fiber-optic cables and one trillion won for the establishment of a mega data center. In return, SK E&S, which has been involved in gas field development and power generation, secured a deal to run a 200 MW offshore solar power plant.

"Based on this project, we will accelerate domestic and foreign renewable energy projects to take the lead in supplying clean energy and contribute to revitalizing the local economy," said SK E&S CEO Yu Jeong-Joon. To expand its renewable energy business, the company has established a joint venture company with Sunrun, a U.S. provider of residential solar electricity.

SK E&S aims to create a data center using electricity produced from Saemangeum and turn it into an area similar to Almere, a planned city and municipality in the province of Flevoland, Netherlands. The Saemangeum Development and Investment Agency (SDIA) vowed to attract more investments by using renewable energy as a sweetener.

A seawall stretching 33 kilometers (20 miles) was built in 2010 to convert an estuarine tidal flat in Saemanguem into agricultural or industrial land. The sea barrier created an area of about 400 square kilometers and a freshwater reservoir. However, Saemangeum has been at the center of a prolonged debate over how to use and develop. Previous governments have mapped out different blueprints, but progress has been slow.

"This investment by the SK consortium will be an opportunity to reverse the sluggish regional atmosphere at once," SDIA administrator Yang Choong-mo said. "We will carry out innovative strategies such as the creation of a marine leisure park and an industrial complex using Saemangeum renewable energy."