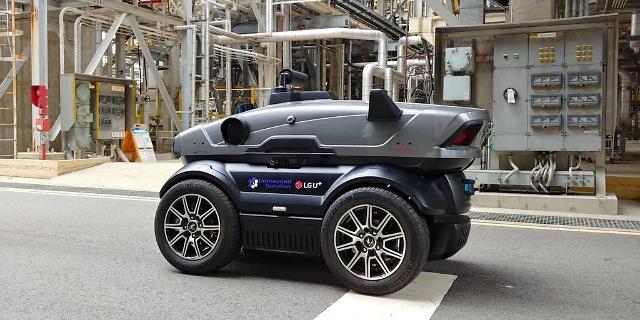 LG Uplus (LGU+) said that the autonomous robot was tested in an oil refining facility in Seosan some 105 kilometers (65 miles) southwest of Seoul. The robot was created using Unmanned Solution's autonomous robot technology and LGU+'s 5G communication and real-time kinematic positioning (RTK), which is a satellite-based navigation technique used for autonomous robots and vehicles.

RTK enhances the precision of location data using mobile communication networks. "Autonomous robots capable of 24-hour patrols will become key facilities in industrial complexes where safety is most important," an LGU+ official was quoted saying. LGU+ will complete the test drive by the end of this year for commercialization next year.

"It is important to keep the traffic lane inside an industrial complex where multiple vehicles are operated simultaneously and the 5G-connected autonomous robot has not moved out of its traffic lane thanks to its highly-upgraded image recognition technology," the official said.

During its test run, the robot has smoothly moved to its designated destination while bypassing obstacles and keeping traffic lanes. It is installed with a thermal imaging camera to check the surface temperature of facilities while the control tower monitored real-time video footage using a 5G network. The robot will be equipped with an intelligent image analytics solution and sensors such as an internet of things (IoT) hazardous gas detector.

South Korean companies have used 5G technologies to develop autonomous robots. An ultra-low latency communication environment will be provided so that robots can make a quick response to various obstacles and unexpected situations and enable smooth communication with control centers. 5G technology enables the effective transmission of large amounts of video and sensor information.

In June, LGU+ partnered with a state engineering institute to establish a smart city and smart factory infrastructure connected with 5G mobile communication in the southwestern industrial city of Gumi by utilizing smart surveillance drones and autonomous patrol robots.