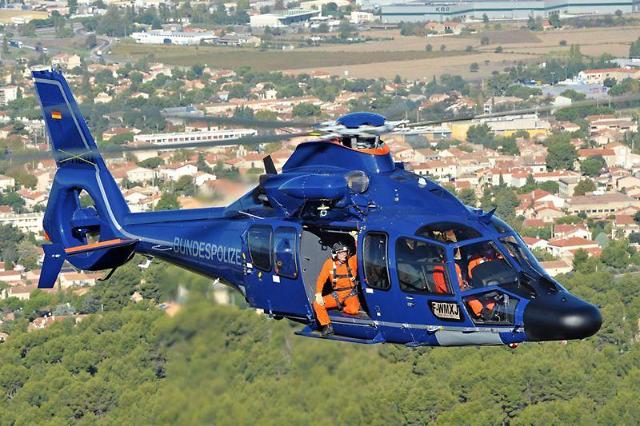 SEOUL -- Airbus, a European aircraft manufacturer, will relocate the production line of its EC155B1 helicopter to the base of its Korean partner next year and cooperate in the commercialization of personal air vehicles and drones, under an agreement between South Korean and EU aviation regulators.

A working arrangement was concluded at a video conference between European Aviation Safety Agency (EASA) CEO Patrick Ky and Kim Sang-do, a senior official in charge of aviation policy at the Ministry of Land, Infrastructure and Transport, to support the relocation of EC155B1's production line. EASA is an EU agency with responsibility for civil aviation safety.

EC155 (Airbus Helicopters H155) is a medium-lift, twin-engine transport helicopter. EC155B1 is an uprated model equipped with two turboshaft engines and higher maximum takeoff weight. Airbus will relocate its production line to the headquarters of Korea Aerospace Industries (KAI), the sole aircraft maker in South Korea, in the southern city of Sacheon.

Airbus will support smooth helicopter production in South Korea and allow test flights, Kim's office said. The two sides would also discuss ways to simplify mutual certification by aviation authorities of each country so that certified aviation products can be exported to Europe.

"By strengthening cooperation with EASA, which is leading global aviation safety policies with the U.S. Federal Aviation Administration, in areas such as urban air mobility (UAM), drones and aviation products, it will serve as a stepping stone for enhancing our technological level and international status in various fields such as technology standards, aviation safety, and aircraft manufacturing and certification," Kim said in a statement released on September 18.

The two sides agreed to cooperate in UAM and drones, the ministry said, adding the EASA head showed keen interest in South Korea's government road map unveiled in June to commercialize drone taxis in 2025 and autonomous flights in 2035. UAM is an ecosystem covering personal air vehicles (PAVs) and infrastructure such as a new navigation system, take-off and landing fields and charging technologies.

PAVs, or flying cars, are emerging as a future system of travel to avoid traffic jams on urban roads as the doorstep-to-doorstep average speed for cars is predicted to degrade further. Startups as well as global giants such as Airbus, Boeing and Uber are vying to develop PAVs and autonomous air taxis.

KAI has developed Surion, a twin-engine transport utility helicopter, with technical help from Airbus Helicopters. Development was completed in 2012, but the Surion has exposed various defects. In October 2019, KAI and Airbus joined hands again for the global marketing of Surion.

The LAH carrying a 20mm machine gun and four anti-tank missiles or 70mm rocket pods has a maximum takeoff weight of 4.9 tons. It is capable of flying at a maximum speed of 324 kilometers (201 miles) per hour. Development of the light civil helicopter (LCH), a variant of LAH, which is capable of carrying up to 15 people, will be completed in 2021.