SEOUL -- A robot for short-distance indoor and outdoor food delivery will make its debut probably this year. Along with integrated autonomous driving technology, the new robot's exterior is covered with a soft material that can absorb shocks and ensure safe delivery even if a sudden collision occurs.

Woowa Brothers, the operator of the country's top food delivery service app Baedal Minjok, has improved the performance and functions of its six-wheeled delivery robot called "Dilly Drive" to put it into pilot service as early as the end of this year.

An LED screen at the front displays simple texts or images, or issue an alert in the event of an impact. Like a car, the robot has night and brake lights, with its LED light flag showing its operation status, Woowa said.

With a maximum payload of 30 kg, Woowa said the indoor and outdoor delivery robot can move safely using improved positioning and obstacle detection sensors. Each wheel can move independently to prevent food from shaking even when passing irregular roads or raised spots. 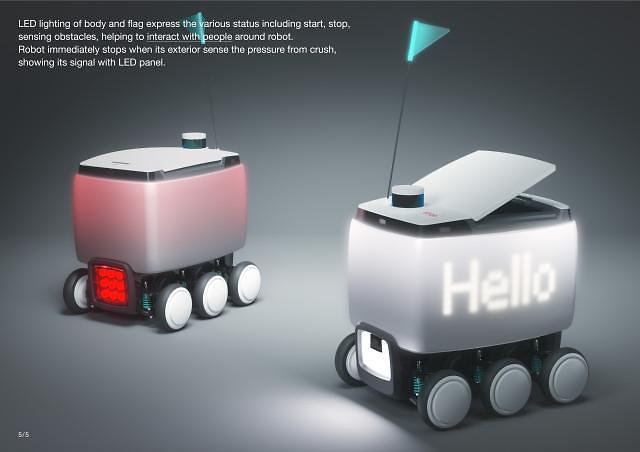 Woowa has developed a lineup of autonomous delivery robots. The final goal is to produce robots capable of roaming freely through the crowded urban streets. The company has tried to overcome various technical barriers for the commercialization of delivery robots that can react sensitively to the movements of automobiles, bicycles, children and pet dogs, or consider ever-changing weather circumstances and road surfaces.

In August, outdoor food delivery robots were deployed for a pilot service at a residential and commercial complex in Suwon south of Seoul. They were designed to make autonomous driving from restaurants to the entrance of apartments. When residents and visitors order menus using a delivery app, robots waiting at a station deliver food or drinks from restaurants and cafes. The robots can run at a speed of up to five km per hour, deliver six lunch boxes or 12 drinks at a time.