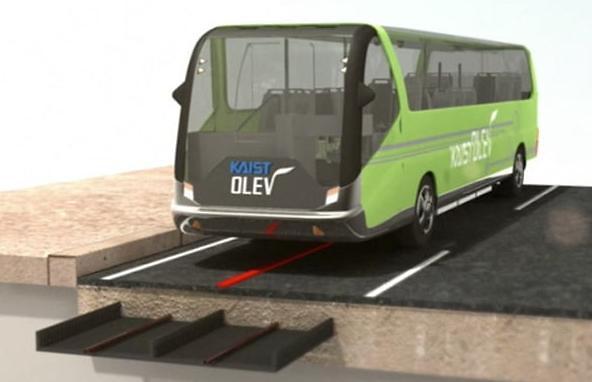 
SEOUL -- South Korea cleared a decisive legal obstacle that has hampered the commercial use of a charging system that enables wireless power transmission while an electric vehicle is stopping or running. Special approval came under a government campaign to ease or suspend regulations for the development of information and communications technology.

The Korea Advanced Institute of Science & Technology (KAIST), a prominent state research institute, has developed shaped magnetic field in resonance (SMFIR) technology that enables the safe transfer of a large amount of energy from a power grid under the road to electric vehicles at rest or in motion.

WiPowerOne, a KAIST spin-off company, has tested SMFIR technology at the KAIST campus in the central city of Daejeon. The wireless charging system is also on trial in Dubai. WiPowerOne has applied for a special demonstration to verify the safety and effectiveness of its wireless charging service using 85kHz frequency.

Currently, the 85kHz frequency band is not distributed for the wireless charging of electric buses. However, WiPowerOne won special approval on September 23 when the Ministry of Science and ICT applied the so-called regulatory sandbox which exempts regulations on new products or services for a certain period of time to nurture new businesses and develop innovative ideas.

The green light was aimed at activating a wireless charging infrastructure-related industry, the ministry said in a statement, adding that WiPowerOne was allowed to demonstrate up to seven electric buses at two bus stops in the KAIST complex on condition that it should submit test results confirming that there is no frequency interference impact on other bandwidth services.