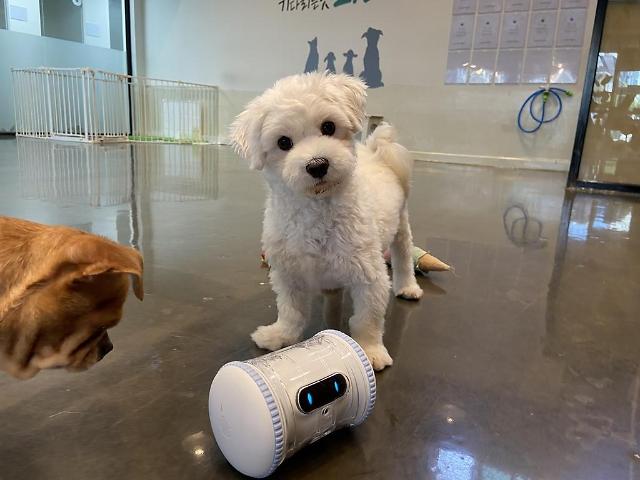 Dogs play with an artificial intelligence-based robot at a dog shelter. [Courtesy of Gangdong District Office]

According to official data, there are about one million pets living in Seoul. In 2018, about 8,200 pets were abandoned with 23.5 percent of them euthanized. To help improve the rights of pets, all dog owners are required to register their pets or face a fine of one million won ($854). However, the rate of registration is below 50 percent.

The office of Gangdong District in southern Seoul said in a statement on September 29 that it has partnered with Clear City, an organization for abandoned dogs, and LG Uplus (LGU+), a mobile carrier, to demonstrate the use of AI-based care robot at a pet shelter. The district office said the carebot can fill a workforce vacuum created by the lack of volunteers who have shunned pet shelters to avoid being infected with COVID-19.

State dog shelters are normally operated with help from volunteers who feed and clean abandoned dogs. About 32 percent of dogs housed at the shelters find new homes, 25 percent return to their original owners and 22 percent are euthanized to reduce overpopulation. In 2017, President Moon Jae-in adopted "Tori," a black homeless dog that was kept at an animal shelter after being rescued from a dog meat farm, to enhance public awareness about abandoned dogs