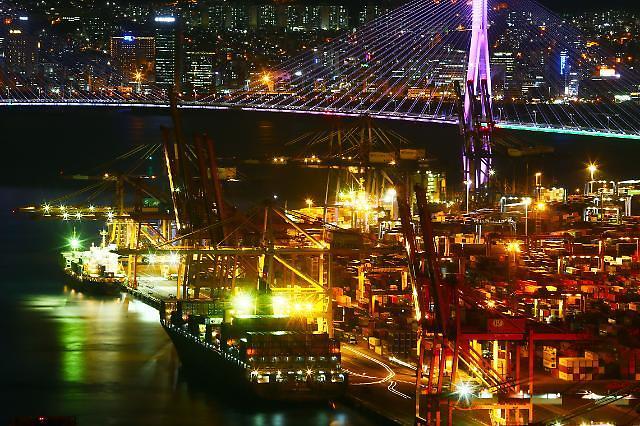 SEOUL -- The operator of South Korea's largest port in the southern city of Busan was selected to lead a state project aimed at developing new port technologies including cargo crane accident prevention systems and the localization of autonomous cargo loader parts. The project is an important process to establish a smart port system in South Korea's maritime hub.

Busan with an annual cargo volume of more than 21 million twenty-foot equivalent units (TEUs) is currently the world's fourth-busiest port. A TEU is a measure used for capacity in container transportation. One TEU refers to a 40-foot standard box container that is most frequently used for maritime cargo transport.

The project requires an investment of some 600 million won ($528,669) each from Busan Port Authority (BPA) and the Ministry of SMEs and Startups. "This joint investment project is designed to develop new port technology and localize machine parts," BPA's cargo research department head Yeon Jeong-heum told Aju News on October 22.

Companies involved in the project will research technologies to develop a big data-based cargo crane malfunction prediction system and localize LiDAR sensors for automated cargo loaders and cargo unloading machinery. LiDAR is a remote sensing technology that measures the distance to a target by illuminating the target with laser light and measuring the reflected light with a sensor.

The main goal is to develop a crane accident prevention system using big data and internet of things (IoT) sensors. Data such as vibration and noise created during crane operations will be collected by IoT sensors in real-time and analyzed to detect indications of malfunction and alert operators. A crane accident could severely affect the port's annual cargo volume. Seven port workers have been killed and 61 were injured in safety accidents in Busan over the last five years.

"Currently, many machines we use at the port are foreign products. It is important to localize machines and parts to reduce costs and increase their reliability," Yeon said, adding the project would produce an outcome in two or three years.

Busan is undergoing a structural change to become a smart port with the latest logistics system. In July, the hub of South Korea's maritime transportation was selected by the Ministry of Science and ICT to join the development of autonomous port vehicles and remote-controlled equipment. For its digital transformation, Busan has also adopted a blockchain-based terminal-to-terminal cargo transit system to efficiently track and manage shipments in real-time in May last year.