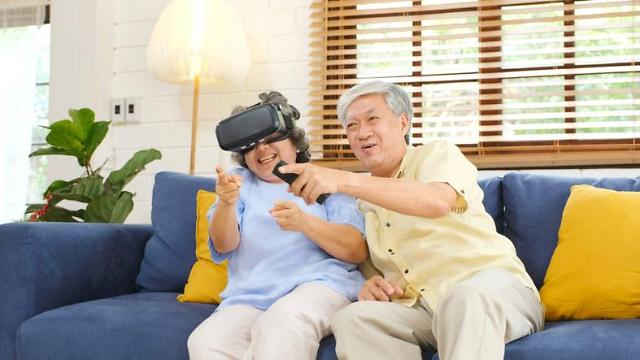 SEOUL -- In South Korea, which is one of the world's most rapidly aging societies, the prevention, early detection and cure of Alzheimer's disease has been an important part of its welfare policy. An innovative cognitive analysis system using virtual reality headsets will be combined with 5G-based mobile edge computing technology for the early detection of cognitive impairment.

The system will be tested in November at community centers for senior citizens with mild dementia symptoms in the southern port city of Busan under an agreement involving SK Telecom (SKT), Pusan National University Hospital and Looxid Labs, an artificial intelligence startup which develops an emotion recognition system with eye-tracking and brainwave sensors.

Coupled with cognitive training and proper treatment, the system will contribute to reducing the prevalence rate of dementia.

Pusan National University Hospital monitors the eyes of senior citizens, who use a VR-based cognitive inspection service, and brainwave sensor data in real-time so that a medical team can conduct professional analysis and upgrade a training program to enhance cognitive skills.

SKT, a mobile carrier in South Korea, provides a 5G MEC-based cloud service that enables the effective transmission of large amounts of video and sensor information. 5G-based MEC is designed to be implemented at cellular base stations or other edge nodes and enables flexible and rapid deployment of new applications and services for clients.

"This cooperation is all the more meaningful because it is a joint project with a company that has grown through our startup incubation program," said SKT's Open Collaboration Group head Yeo Ji-young. "Based on 5G technologies, we will continue to work with not only promising startups but also various partners to provide innovative services and create social value."

Alzheimer's disease is a progressive disorder that causes brain cells to degenerate and die. Common symptoms are a continuous decline in an ability to think, the loss of memory and disruption in a person's ability to function as an individual human being. Community health centers provide a customized service for senior citizens such as dementia counseling, screening and a prevention program.

As part of a government campaign to provide care services for elderlies, South Korea, which is one of the world's most wired countries, is actively adopting various devices such as VR headsets, AI robots and IoT sensors. Some devices are already in operation at daycare centers for elderlies with geriatric diseases and cognitive disorders such as dementia and delirium.

AI voice assistant speaker-based care services were found to have increased the happiness of old people staying at their homes. In 2019, the government adopted an AI and big-data based service to find people left in blind spots of communities. Wonju, a provincial city some 85 kilometers (53 miles) southeast of Seoul, would use a suitcase-sized humanoid care robot capable of recognizing facial expressions and engaging in chats at dementia care centers, social welfare centers and elderly homes.