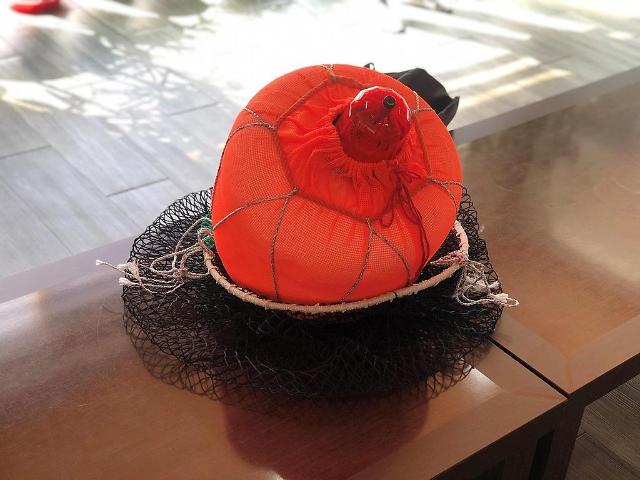 SEOUL -- Female divers, known as haenyeo in Korean, scour the seafloor to harvest a variety of mollusks, seaweed and other sea life from the ocean. Their tool consists of a wetsuit, a diving mask, fins, gloves, chest weights, a weeding hoe and a net attached to a buoy called "taewak" which is an integral part of diving equipment.

Female divers living on South Korea's southern resort island of Jeju were listed as UNESCO's intangible cultural heritage in 2016. The island used to have up to 23,000 female divers in 1965, but the number has decreased gradually. Female divers also work in other parts of the Korean peninsula.

Without artificial breathing equipment, female divers could stay in the water for up to six hours at a time and dive up to 30 meters (98 feet) deep. They can hold their breath for over three minutes. Originally made of pampas grass and a dried gourd, taewak provides a float on which female divers can rest to catch their breath. Nowadays, the buoy is made from polystyrene foam.

The haenyeo culture is on the verge of disappearing gradually despite financial support and other benefits. Most of South Korea's female divers are old and die one by one due to excessive work, ailment and safety accidents. To help reduce haenyeo's safety accidents, Pohang University of Science and Technology (POSTECH), a private research university based in the southeastern port of Pohang, came up with modern devices incorporating advanced IT technology.

POSTECH's Sea Grant center, which is committed to developing a skilled marine and coastal workforce, has developed a smart flotation device and a smartwatch to protect female divers from dangerous situations that occur unexpectedly in the sea.

The smart flotation device uses underwater cameras and artificial intelligence installed inside to monitor haenyeo's habits or diving areas and send alerts to the outside in case of an emergency. The smartwatch provides crucial information through vibration by identifying haenyeo's diving time, fishing location, the depth of water, and temperatures.

There is no doubt that modern equipment will help prevent accidental deaths. However, many female divers adhere to traditional methods.