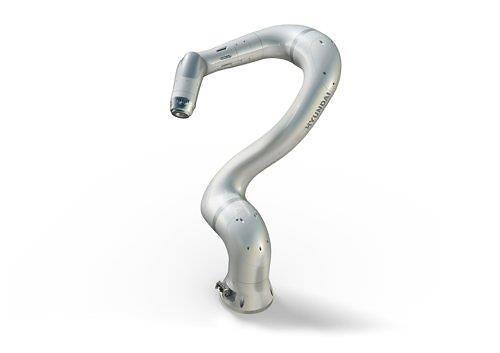 Thanks to rapid progress in technology development, robots occupy more and more places across the industry. KFC is no exception as it endeavors to cut costs and create better hygienic cooking environments. The franchise joined hands with Baidu, a leading information technology company in China, to open a new concept store with robot servers in Shanghai in 2016, followed by the opening in September of a store in Moscow where menus are cooked and served by robots.

Hyundai Robotics said in a statement on October 23 that the company has signed a memorandum of understanding with KFC's South Korean office to jointly develop automated chicken-frying robots. In KFC kitchens, human workers will take care of chores that require delicate handcraft work such as the seasoning of chicken meat while robots created by Hyundai Robotics will be responsible for dangerous work such as frying and grilling.

"We've differentiated the types of robots so that human workers are not disrupted when robots swing around," Oh said. "They were designed to be safe and efficient," he said, adding robots would have various sensors embedded with vision sensing technology to recognize each food processing step.

Automation has become a new trend in South Korea's restaurant industry, with store operators adopting robot workers to increase work efficiency and process ingredients. Some are used for stir-frying or cooking soup. Hyundai Robotics has diversified its lineup to produce mobile service robots for the delivery of parcels.

Hyundai Robotics has agreed with KT, a top telecom company in South Korea, to develop service robots that can be used in hotels and restaurants. In a showcase event in May, the company's first mobile service robot, UNI, demonstrated voice responses and automatic driving through spatial mapping as well as user-friendly functions, such as text message delivery and voice guidance. UNI will be applied to hotel delivery and other services such as office guidance, security and air purifying.