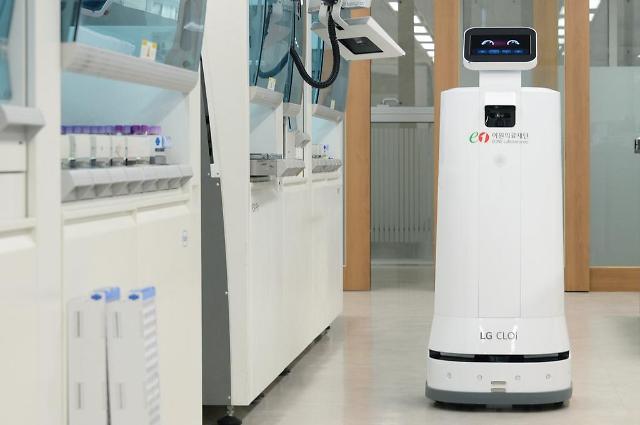 SEOUL -- Autonomous serving robots developed by LG Electronics were deployed at two South Korean hospitals to carry specimens and other objects from labs and clinics. A robot with three closet-like compartments can carry up to 15 kilograms (33 pounds) with its status and schedule monitored by a control tower system. It has locks built into compartments for security.

LG said in a statement on October 29 that it has deployed two CLoi ServeBots each at EONE Laboratories, a medical research lab in the western port city of Incheon, and the National Cancer Center in Goyang, a northwestern satellite city of Seoul.

LG said serving robots capable of using elevators to travel between floors will carry specimens between some 13 places at EONE. In the cancer center, robots travel back and forth between diagnostic and pathology departments, carrying samples.

"CLoi robots can help medical staff increase their work efficiency by taking care of repetitive chores," LG's robot business center head Roh Jin-seo was quoted as saying. "CLoi will be able to provide various kinds of services as it can move freely between floors."

Serving robots are favored by medical centers and multi-purpose facilities such as elderly homes and hotels in South Korea for their effectiveness and non-contact work process that minimizes human contact.