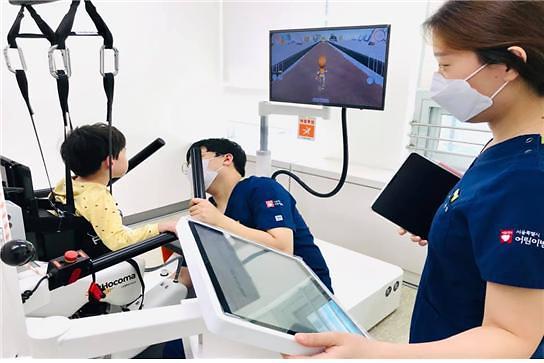 SEOUL -- A Swiss-made wearable robot has been brought into a public hospital in Seoul to rehabilitate children with walking disorders or polio, an infectious disease that causes flaccid paralysis. A virtual reality device can check the walking pattern of a child patient on a treadmill so that doctors can provide feedback in real-time.

Seoul Child Hospital said in a statement on November 3 that it has opened a special rehabilitation clinic using a wearable robot to detect and diagnose the walking pattern of children and help them walk in a proper pose. "With a wearable robot, we will continue to play a leading role in the rehabilitation of children and help little patients through each stage of treatment," hospital head Choi Jin-sook was quoted as saying.

Some medical centers in South Korea use rehabilitation robots. However, access is limited due to high treatment fees. Seoul Child Hospital said that with its robots, patients can use rehabilitation services without any financial burden.