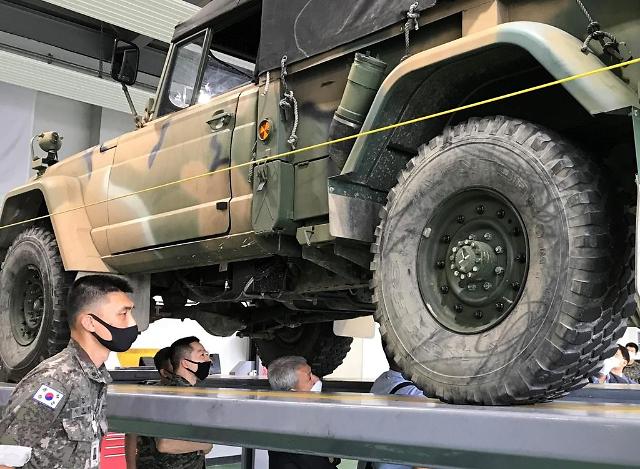 [Courtesy of the Ministry of Defense]

SEOUL -- Plasma burners installed in diesel-fueled military vehicles were found to have reduced the emission of particulate matter, a mixture of microscopic particles and droplets. South Korea's defense ministry said the plasma burner is effective when a vehicle travels short distances because it can maintain high temperatures enough to burn off pollution.

Internal combustion engine vehicles using diesel fuels are normally equipped with a device called diesel particulate filter (DPF) connected to the exhaust pipe. It filters and collects particulate matters to burn it off through a regular regeneration process using a catalyst or by heating the filter to soot combustion temperatures.

The plasma burner works like DPF but it uses extremely high heat caused by the ionization of gases inside the filter to effectively burn off particulate matter. Unlike DPF that regenerates when its filter is near full, the plasma burner constantly burns off pollution.

In a test of 50 Air Force tactical vehicles and trucks, researchers found that the plasma burner is up to 95 percent more effective than conventional diesel combustion engine exhaust systems in burning off particulate matter. "After verifying the efficacy of the plasma burner through our interim check, we will expand the application of the plasma burner to other military and construction vehicles," a defense ministry official was quoted as saying.