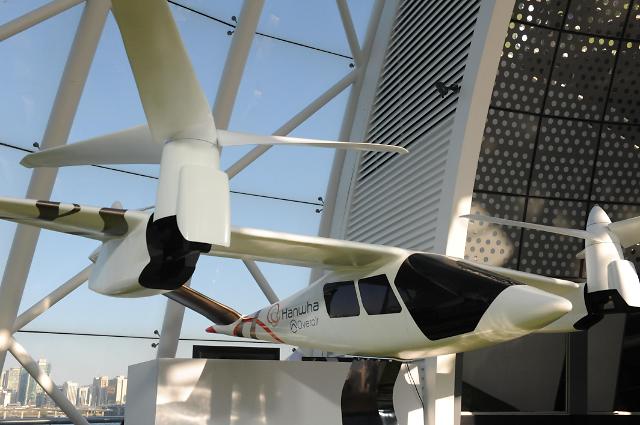 The mock-up of Butterfly from Hanwha Systems is on display at a public event in Seoul on November 11. [Yonhap News Photo ]


SEOUL -- With a stable demonstration flight across the river in Seoul, an electric, vertical takeoff and landing aircraft produced by EHang, a Chinese developer of autonomous aerial vehicles, stole the show at a government-sponsored event aimed at achieving the early introduction of flying cars and autonomous air taxis in South Korea.

The event was hosted by the Ministry of Land, Infrastructure and Transport and the Seoul city government at a riverside park in Yeouido to demonstrate Urban Air Mobility (UAM), an ecosystem covering personal air vehicles (PAVs) and infrastructure. Flying cars are emerging as a future system of travel to avoid traffic jams on urban roads.

EHang 216, a Chinese eVTOL with 16 rotors in a coaxial double-baled design, was thrown into the spotlight by making a successful test flight watched by invited guests and journalists. The two-seater has already completed a number of test and demonstration flights. 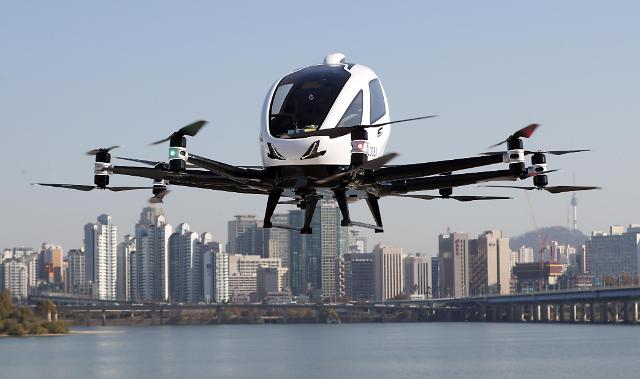 EHang 216, a Chinese eVTOL, makes a test flight at an event in Seoul on November 11. [Yonhap News Photo]


However, Hanwha Systems, a key member of UAM Team Korea, a public-private consultative body launched in June to commercialize drone taxis in 2025, kept its spirits up, although the company had to display the mock-up of its PAV "Butterfly," which is under development with Overair, an American eVTOL company. In July 2019, Hanwha Systems announced a $25 million equity investment in K4 Aeronautics, a U.S. PAV developer, followed by the acquisition of a 30 percent stake in Overair.

Butterfly was applied with the tiltrotor design of low noise and high efficiency. Tiltrotor design combines the vertical lift capability of a helicopter with the speed and range of a conventional fixed-wing aircraft.

"We will contribute to laying the foundation for the future transportation environment based on our defense electronics and IT technology," Hanwha Systems CEO Kim Yeon-chul said, promising to build a drone taxi hub at an airport in western Seoul. Hanwha has partnered with Korea Airport Corporation (KAC), the operator of airports, for the development of air taxis, infrastructure and services.

Also on display was the real model of Hexa from Lift Aircraft, an American eVTOL company, that resembled a large drone with 18 sets of propellers, motors and batteries. The one-seat aircraft can be controlled simply by varying the speed of its multiple electric motors and even fly with up to six of its eighteen motors out. Hexa has a ballistic parachute that autonomously deploys in the event of an emergency and has five floats to safely land on water.

A control system that supports the safe operation of drones and air taxis was demonstrated as part of a government road map that calls for the commercialization of drone taxis in 2025 and autonomous flights in 2035. "This demonstration will bring us an early experience of the upcoming future of urban air traffic," said Sohn Myung-soo, the second vice minister of the Ministry of Land, Infrastructure and Transport.