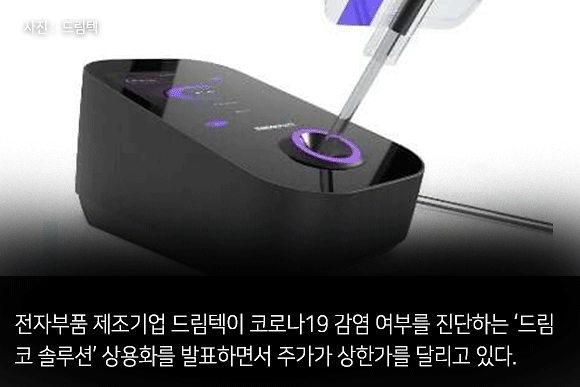 Dreamtech jumped 29.8 percent to 14,600 won ($13.1) in morning transactions on November 20, with its website paralyzed due to heavy traffic. Dreamtech is the exclusive vendor for Nanoscent's electronic solution to detect volatile organic compounds (VOCs). The Israeli startup has developed a chip that enables electronic devices to identify COVID-19 by analyzing nasal exhalations.

Dreamtech and Nanoscent have worked together to develop an innovative simple screening device that has a sensitivity of around 90 percent in detecting viruses. The device can be used anywhere at airports or crowded areas like stadiums because it yields results in 30 seconds. For commercialization, the two companies are upgrading algorithms to increase the sensitivity of their device

Unconfirmed news reports in Seoul said that Dreamtech would try to win state approval in South Korea for clinical trials and mass-production in the first half of 2021 as the pilot screening in October of players and team staff from Tottenham Hotspur, a premium league club, and three other soccer clubs in Britain, showed good results and proved that unskilled ordinary people can carry out a group checkup about an hour of training.