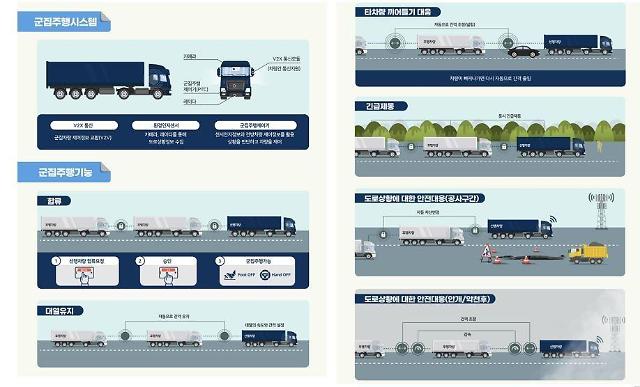 SEOUL -- To test the efficacy of autonomous trucks on actual public roads, South Korea's Ministry of Land, Infrastructure and Transport will demonstrate truck platooning using connected self-driving trucks. The group-driving feature is considered one of the key points of autonomous trucks.

Truck platooning is an autonomous driving method that interlinks two or more autonomous trucks to drive in a formation. Trucks communicate with each other to share on-road information such as obstacles like potholes, pedestrians and other traffic. Truck platooning can also reduce fuel consumption and carbon dioxide emission as vehicles drive close to each other to significantly reduce air-drag friction.

The transport ministry said in a statement on November 26 that it will demonstrate truck platooning using three Hyundai Xcient heavy-duty trucks on an eight-kilometer (4.9 miles)-long road southeast of Seoul on November 27. "Truck platooning is a good example which shows big changes that can be brought to various sectors including passenger and cargo logistics sectors using autonomous technology," a transport ministry official was quoted as saying.

The group-driving technology was developed as a 13.4 billion won ($12.1 million) joint project that was launched two years ago.

According to the ministry, Xcient trucks will move at a speed of 70 km (43 miles) per hour while communicating with each other using vehicle-to-everything (V2X) technology. Trucks will maintain a distance of 16.7 meters (54 feet) from one another. Emergency stops will be performed using virtual obstacles disguised as wild animals unexpectedly crossing the road.

The transport ministry said that it plans to demonstrate truck platooning on a larger scale next year with four trucks moving at a higher speed of 80 km per hour. A smartphone app will help truck owners to join other trucks moving towards the same destination.