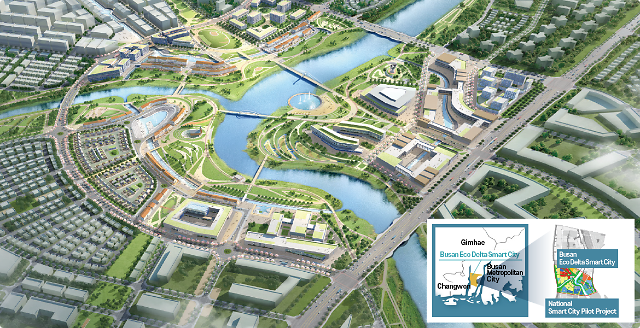 SEOUL -- A consortium led by Hanwha Energy, an energy solutions company, has been selected for a government project to build South Korea's first planned smart city that would serve as a testbed to foster innovative technologies such as big data, autonomous driving and artificial intelligence, along with an eco-friendly hydrothermal energy system.

The so-called Eco-Delta Smart City (EDC) with 3,380 households will be built on a lot of 2.8 square kilometers located at the basin of Nakdong River in the southern port city of Busan. The project costs more than three trillion won ($2.7 billion), and a special purpose company involving private and public sector operators will establish and operate the pilot smart city for more than 15 years.

As the preferred bidder, a private sector consortium involving more than 20 private companies, including three major investors -- Hanwha Energy, Hanwha General Insurance and NH Investment & Securities -- was selected on December 1 by K-water, a state water resource development and management agency, and the Ministry of Land, Infrastructure and Transport.

A smart city is a suburban area that uses different types of electronic sensors to collect and share data. The processed data is efficiently used by various parts of the city. Because the smart city is an integrated web of devices and networks, a fast and secure internet connection is needed.

EDC will feature a distributed water purification system, a drone demonstration zone, an R&D complex and a hydrothermal energy system. Big data, internet of things, artificial intelligence and robots will be utilized to tackle urbanization challenges. Residents will be given a free 5G wireless internet and a disaster management system for earthquakes and floods.

The hydrothermal energy system uses the temperature difference between surface water in different seasons to heat or cool buildings. The heat extracted from canals or rivers can be stored in an aquifer thermal energy storage system as renewable energy. Surface water heat extraction has a positive effect on water quality and counteracts urban heat stress, botulism and the proliferation of toxic blue-green algae.

EDC is one of the two sites designated in January 2018 to test smart city platforms that would feature future technologies. The other smart city to be built in the central city of Sejong will be a self-sustainable city that supports connected cars. Sejong is already known for a smart vehicle infrastructure for the testing of autonomous technologies.