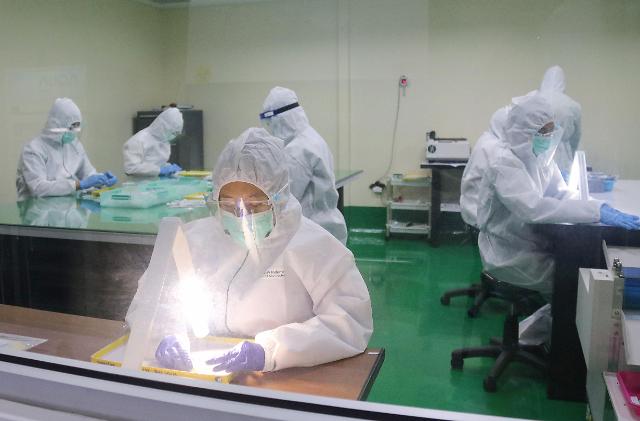 
SEOUL -- Helped by the growing popularity of "K-quarantine" technologies that have been benchmarked by many countries, South Korea has earned $2.27 billion with exports of in-vitro diagnostic devices for the screening of COVID-19 that began in April. Government data showed that South Korean devices have been shipped to 170 countries to test about 497 million people.

K-quarantine refers to various anti-epidemic technologies developed by South Korea to combat COVID-19, such as diagnostic kits and a drive-thru diagnostic system introduced for the quick screening of patients infected with a novel coronavirus.

According to the Ministry of Food and Drug Safety, India accounted for 15.6 percent of South Korea's total test kit exports as of November 30, followed by Germany with 13.2 percent and the Netherlands with 9.6 percent. Italy stood fourth with 7.8 percent. Along with devices using the real-time polymerase chain reaction (RT-PCR) method that amplifies specific DNA samples, South Korean companies have developed antigen and antibody test kits.

The operation procedure and method of in vitro diagnosis based on RT-PCR has been adopted by the International Organization for Standardization (ISO) as an international standard, the ministry said.
The RT-PCR method has been used widely in South Korea due to its reliability. ISO, headquartered in Geneva, is a standard-setting body that promotes worldwide proprietary, industrial, and commercial standards.

South Korea has worked out a series of innovative methods to fight COVID-19. A walk-thru system that reduces the time taken for the screening of patients and other methods introduced by South Korea await international standards.

A "glove-wall" system that allows doctors to examine people from the other side of a protective wall. The glove wall system consists of a box-shaped room with a clear acrylic wall with a pair of hand holes which have oversleeves extended outwards so that medical staff can take samples. A dedicated app monitors those in obligatory self-quarantine for two weeks, utilizing a GPS function to make the alarm sound if users violate guidelines.

To prevent a queue in patients waiting for beds at isolation wards, patients have been divided into two groups. Critical patients were treated at negative pressure wards and those showing light symptoms or asymptomatic patients were sent to "living and treatment support centers." Government and private buildings equipped with lodging and dining facilities in remote areas have been used as temporary hospitals.