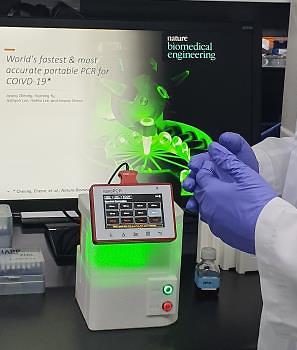 SEOUL -- South Korea's state research institute has developed a highly accurate polymerase chain reaction (PCR) device using nanotechnology that is capable of diagnosing COVID-19 in just 17 minutes. Unlike conventional test methods, the point-of-care device is portable and can draw results at the time and place of testing.

The real-time polymerase chain reaction (RT-PCR) test method that amplifies a specific DNA sample was adopted in South Korea in March when South Korea was hit by the first wave of COVID-19. While the RT-PCR method showed high accuracy, it requires samples to be taken for specialized facilities as well as trained personnel. It takes more than six hours on average to get results.

The Institute for Basic Science said in a statement on December 3 that a joint research team has developed "nanoPCR," a rapid point-of-care (POC) PCR test device using nanomagnetic particles. The device is about the size of a large toaster machine that weighs three kilograms (6.6 pounds).

"By upgrading and minimizing conventional PCR test methods, we have developed a technology that is capable of testing COVID-19 on-site," team leader Cheon Jin-woo was quoted as saying. The researcher said that the new portable PCR device would become a useful platform for diagnosing virus infections in the future, but commercialization requires more research. The portable device uses magneto-plasmonic nanoparticles (MPNs) that convert light energy into heat energy. MPN is nano-sized magnets coated with gold.

When the device shines light onto a sample mixed with an MPN solution, the solution is heated up to 42 degrees Celsius (107.6 degrees Fahrenheit) inside a test tube to cause the reverse transcription reaction of DNA. DNA is amplified through a series of repeated heating and cooling. The process takes more than five hours on the previous RT-PCR device.

The device uses magnetic fields to pull MPN to the bottom of the test tube through the amplification process while the genetic matter of viruses floats to the surface highlighted in green fluorescent color. If the test sample is tested positive for the virus, it will show signs of fluorescent green. The technology used to develop the nano PCR device was published through Nature Biomedical Engineering, a peer-reviewed journal.