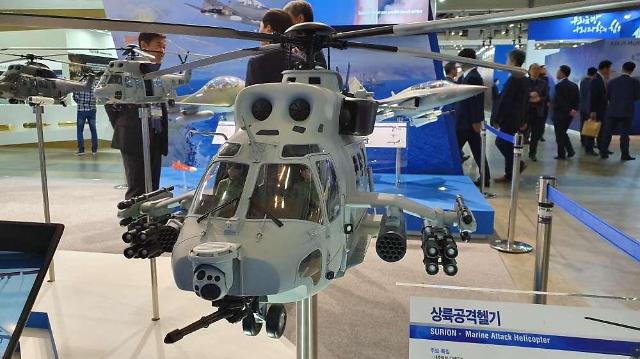 
SEOUL -- The developer of home-made military helicopters based on the Surion, a twin-engine, transport utility model which has been in service, frowned on a strident bid by U.S. aircraft maker Bell Textron to sell its AH-1Z Viper to South Korea's marine force which plans to operate about 20 attack choppers with a strong offensive power from 2026.

To replace an aging fleet of utility helicopters for military and civilian use, Korea Aerospace Industries (KAI), the sole aircraft maker in South Korea, has developed the Surion with technical assistance from Airbus, a European aircraft manufacturer. Since its development was completed in July 2012, Surion choppers have been delivered to South Korean troops.

KAI has produced Surion's amphibious variant called "Marineon" for the Marine Corps. In July 2018, a Marineon chopper crashed on a test flight at a naval airbase, killing five soldiers. State inspectors found that poor heat treatment caused a crack in the roto mast provided by a French company, but the defense ministry went ahead with the deployment of Marineon helicopters to support the localization of military helicopters.

Bell Textron responded with a timely bid, boasting of AH-1Z Viper's superior performance, armament and operational compatibility with equipment used by South Korea's military which has been heavily dependent on U.S. arsenal and security umbrella for more than six decades since the two countries strengthened their alliance following the 1950-53 Korean War.

"Bell has had a long relationship with the Korean industry as a supplier of critical aircraft components," Bell's executive vice president Vince Tobin said during an online press conference at a hotel in Seoul on December 9. "Today, with the new AH-1Z, Bell hopes to extend its relationship with Korea into the next generation."

In the first round of advance research, researchers recommended Ameican attack helicopters such as AH-1Z Viper, but the state-funded Defense Agency for Technology and Quality later picked Marineon's attack version. Military authorities would work out a basic strategy plan by April 2021 to decide whether to purchase home-made attack helicopters or a foreign model.

Through rapid economic and technological advancement, Seoul has tried hard to localize expensive weapons such as fighter jets, submarines, missiles and warships, but Washington has been reluctant to transfer sensitive military equipment and technologies. The localization of military aircraft has been led by KAI, which has maintained cooperation with Airbus.

In an attempt to win over a big client in Asia, Airbus agreed in September to relocate the production line of its EC155B1 helicopter to South Korea. EC155 (Airbus Helicopters H155) is a medium-lift, twin-engine transport helicopter. EC155B1 is an uprated model equipped with two turboshaft engines and a higher maximum takeoff weight.

KAI has been involved in South Korea's first light armed helicopter (LAH) to replace an aging fleet of MD500s and AH-1S Cobra. Based on H-155, the development of KAI's light attack helicopter began in 2015 for completion in late 2022. KAI's LAH model carrying a 20mm machine gun and four anti-tank missiles or 70mm rocket pods is capable of flying at a maximum speed of 324 kilometers (201 miles) per hour.