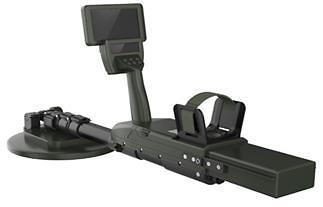 
SEOUL -- A new fully-localized mine detector that can be used for sweeping and mapping minimum metal land mines such as North Korean wooden-box land mines, was developed through a joint project led by Hanwha Systems, a major defense contractor in South Korea. The new detector will be deployed in 2022.

The wooden-box mine used by North Korea is a copy of the Soviet mine that was used during World War II. It consists of a wooden box packed full of explosives and a pressure fuse. The mine is detonated when pressure is applied to the box or when someone tries to pry it open. It has the minimum amount of metal components, making it extremely hard to detect using conventional mine detectors.

Because the North Korean mines are buoyant, they are easily washed down from the hills and mountains in the frontlines to shorelines and riverbanks by torrential rains. They are a constant threat to civilians and soldiers working inside and near the Demilitarized Zone (DMZ), which splits the Korean Peninsula. In 2015, two South Korean soldiers were injured by two wooden-box mines inside the DMZ.

DAPA said that the detector can cover wider and deeper areas than conventional detectors used by the military that were developed in the late 1990s. The development of the new detector began as a state project in September 2015.

According to the defense agency, the new mine detector is 100 percent localized to reduce manufacturing costs. "We expect to export the detector in the future because of its price competitiveness," DAPA said, adding that the detector can also be used for the excavation of war remains.