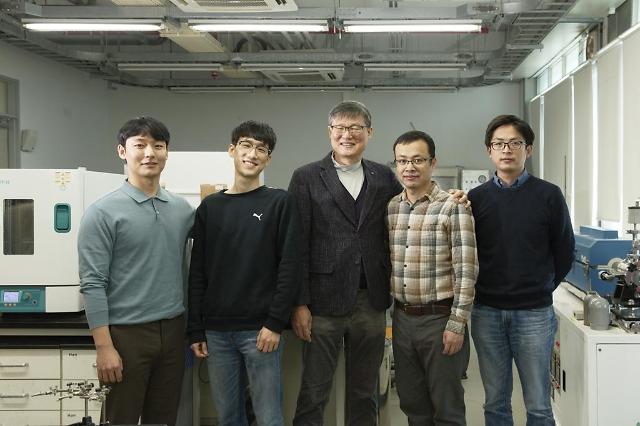 SEOUL -- South Korean researchers achieved a major technological breakthrough in synthesizing ammonia more efficiently than traditional methods at low cost with eco-friendly technology that could be a game-changer as it enables the production of a useful chemical substance with less sophisticated machinery.

Ammonia (NH3) is a chemical compound composed of one nitrogen atom and three hydrogen atoms, which has been used to produce fertilizers and other industrial products such as plastics, textiles pesticides and explosives. The traditional Harber-Bosch artificial nitrogen fixation process developed in 1909 has been used mainly for the mass production of ammonia

The Ulsan National Institute of Science and Technology (UNIST) said in a statement on December 15 that its research team led by professor Baek Jong-beom has developed a new ammonia synthesis technology. "We have developed a new ammonia production method by strengthening weaknesses of the former method that is 100 years old," Baek said, adding that costs can be reduced greatly as ammonia can be created anywhere using low air pressure and temperatures. The research was published on the website of Nature Nanotechnology, a peer-reviewed journal.

Ammonia is highlighted as the top resource to establish an eco-friendly hydrogen fuel cell-based infrastructure. The chemical compound is used to extract hydrogen. Because concentrated hydrogen in a gas state is dangerous to handle, it is liquefied or converted into ammonia for transport. Hydrogen is extracted using rare metal catalysts at facilities located near hydrogen charging stations for easy and safe storage.

The Harber-Bosch process requires special equipment to be conducted at high pressures above 100 bar, roughly about 100 times the current air pressure at sea level, and between 400 and 500 degrees Celsius (752 and 932 degrees Fahrenheit). About 25 volume percentage (vol%) of gas is converted through the process. Volume percentage is a measure of the concentration of a substance in a solution.

Baek's team used an iron-based catalyst at 45°C and 1 bar (the air pressure at sea level) and the ball-milling method. Stainless steel balls and iron powder are inserted into a rapidly rotating canister. Nitrogen and hydrogen are injected into the canister to cause chemical reactions. It emits no greenhouse gas. About three percent of carbon dioxide is created in ammonia production. UNIST researchers were able to achieve the final ammonia concentration of 82.5vol%, which is about 2.3 times higher than the conventional synthesizing method.