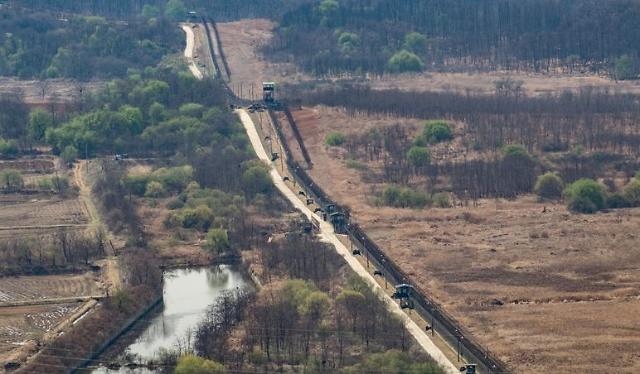 SEOUL -- South Korea will use an unmanned monitoring device backed by sensitive sensors to reinforce scientific surveillance equipment attached to front-line iron fences that have played a key role in blocking surprise attacks and intrusion by North Korean soldiers across the world's last Cold War frontier established at the end of the 1950-53 Korean War.

The demilitarized zone (DMZ) is a four-kilometer-wide strip of land that has divided the peninsula since an armistice accord ended the three-year conflict in 1953. It has been heavily fortified with minefields, concrete walls and iron fences. Armed clashes and shooting have raised cross-border tensions sporadically between South and North Korean troops manning entrenched concrete guard posts inside the zone.

Scientific surveillance devices such as sensors, cameras and other sensitive equipment have been installed on South Korean iron fences that stretch about 250 km (160 miles) from the east to the west. However, a functional defect was detected on November 3 when a North Korean civilian defected south across the barbed wire fence.

A scientific system consisting of sensors and cameras has been installed to blare an alarm sound when certain pressure was applied to a mesh-type wire web made of fiber optic material on top of the iron fence. The web detects when signals are interrupted or weak due to a certain amount of weight. But the scientific warning system did not work properly when the defector crossed the fence.

Instead, a front-line guard found the defector with thermal surveillance equipment. Military inspectors found later that a screw designed to detect weight and press optical fiber was not properly fixed.

Hanwha's unmanned monitoring device combines various sensors and automatically sends an alarm sound by detecting ground vibrations when an enemy approaches it. If any intrusion is detected, soldiers can immediately check the target through image sensors. It is composed of seismic and ground vibration sensors, infrared sensors, image sensors, and terminals.

Unlike the current fixed detection system, the new device is portable and can be installed in vulnerable areas whenever necessary. Hanwha and DAPA will complete research and development by 2022.