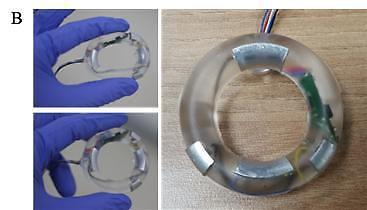 
SEOUL -- South Korean researchers have developed an electroceutical that can diagnose and treat premature birth at an early date. An electroceutical is an electronic device designed to affect biological systems in such a fashion as to alleviate or mitigate symptomatology or pathology. Electroceuticals are a new category of therapeutic agents that act by targeting the neural circuits of organs.

The state-run Korea Institute of Science and Technology (KIST) said researchers from KIST's brain science institute and Korea University Anam Hospital have inserted a doughnut-shaped nerve electrode non-invasively into the cervix of a pregnant woman to detect uterine contraction signals in real time and diagnose premature birth. The neuro-electrode can function as an electroceutical that can suppress the contraction of the uterus.

The team confirmed through animal testing that electrical stimulation generated by the electroceutical can delay and inhibit uterine contraction. "The developed doughnut-type electroceutical may develop into a new concept of medical technology by using electrical stimulation rather than conventional chemical-based treatments," Lee Soo-hyun, a researcher at KIST's brain science institute said, calling for state support to conduct clinical trials.

Premature birth is the birth of a baby at fewer than 37 weeks' gestational age. Symptoms of preterm labor include uterine contractions which occur more often than every ten minutes or the leaking of fluid from the vagina. Premature infants are at greater risk for cerebral palsy, delays in development, hearing problems and sight problems. Preterm birth is the most common cause of death among infants worldwide.