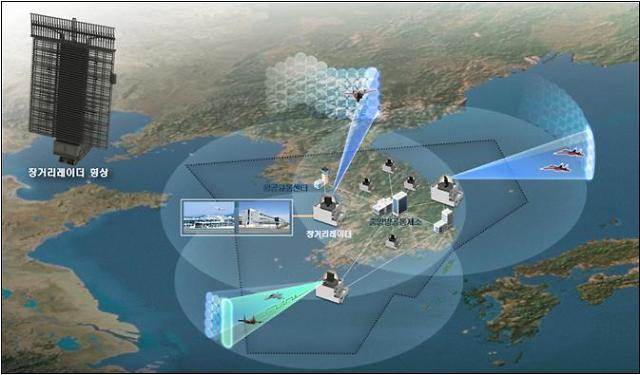 
SEOUL -- After years of nerve-racking air confrontation with Russian and Chinese warplanes near its airspace, South Korea will push ahead with the quick development of an advanced long-range radar system to end its dependence on old U.S. equipment capable of scanning a broad and distant flying zone. Developers believe their technology level has been raised enough to catch up with U.S. technology.

LIG Nex1 was selected for a military project worth 46 billion won ($41 million) to develop a radar system covering the Korean Air Defense Identification Zone (KADIZ), an air defense zone claimed by Seoul, the Defense Acquisition Program Administration (DAPA) controlled by the defense ministry said in a statement on February 8.

The agency said it would deploy a new radar system from 2027 to replace aging U.S. equipment that has been used for air defense operations to monitor and identify aircraft in KADIZ. Only a few countries produce long-range radar systems. South Korea once promoted domestic research and development, but the project was suspended in 2017 due to a lack of technology.

"The closer monitoring of KADIZ is possible if we successfully develop and deploy a system that will contribute more to our national economy and revitalize our defense industry because we can replace imported radar with home-made equipment," Chung Ki-young, a senior DAPA official, was quoted as saying.

Through rapid economic and technological advancement, Seoul has tried hard to localize expensive weapons such as fighter jets, submarines, missiles and warships, but Washington has been reluctant to transfer sensitive military technologies.

Considering the urgency of replacing radar, South Korea will develop a radar system in 48 months, DAPA said, adding that demands for improved radar performance are growing due to the frequent entry of Chinese and Russian military aircraft into KADIZ. South Korean jet fighters have scrambled to chase Chinese and Russian warplanes over 150 times between October 2018 and September 2020.

The intermittent appearance of Chinese and Russian warplanes flying through strategic air corridors between the Korean peninsula and Japan has triggered security alerts in Northeast Asia. Beijing has reacted sensitively to U.S. strategic military assets in South Korea. In July 2019, South Korean jet fighters fired anti-missile flares and hundreds of warning shots to intercept a Russian A-50 AWACS aircraft for violating air space near Dokdo, a chain of islets located between the Korean peninsula and Japan.

The intrusion followed a joint flight by Russian and Chinese bombers through KADIZ, and the defense ministry saw it as an all-purpose flight to check the U.S. strategy in the Pacific and collect military information in South Korea and Japan where U.S. troops have been stationed since the end of World War II.