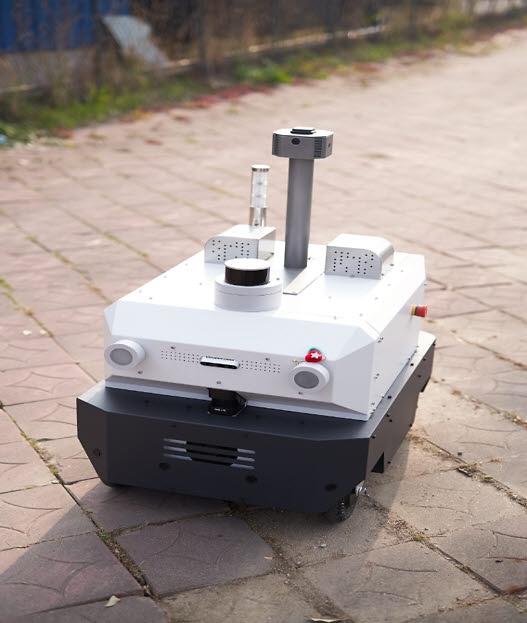 SEOUL -- South Korea's mobile carrier LG Uplus partnered with the southern city of Jeonju to demonstrate an air monitoring system using autonomous robots and air quality measuring equipment inside an industrial complex that is about 50 years old. Information collected during the demonstration will later be used for city management.

Currently, human inspectors using vans loaded with measuring equipment patrol in industrial complexes in many areas to monitor air quality and the emission of pollution. Drones are sometimes used to check the quality of air. However, such a method takes time as inspectors cannot cover many areas to get real-time information.

Jeonju some 195 kilometers (121 miles) south of Seoul said in a statement on February 15 that an air quality monitoring system would be demonstrated in the Palbok Industrial Complex and its surrounding residential areas in March. The system consists of a control tower, six autonomous robots and 20 air monitoring stations.

"We will be able to provide a fresh air environment using data created by autonomous robots and monitoring stations," an unnamed Jeonju official was quoted as saying. Palbok in Jeonju's northwestern district was designated as an industrial complex about 50 years ago. Many factories are outdated, and residents living in nearby areas often complain about pollution and bad air quality.

With various sensors, robots will freely roam to check air quality in real-time. They can also detect abnormal phenomena such as fire or smoke to prevent disasters. Collected air quality information will be used to create big data for the improvement of the quality of life.

In September 2020, LGU+ demonstrated a 5G-connected autonomous factory monitoring robot in an oil refining facility in Seosan some 105 kilometers southwest of Seoul. The robot used a 5G connection and satellite-based navigation techniques to patrol around the refinery. The unmanned patrol robot is scheduled for commercialization in 2021.