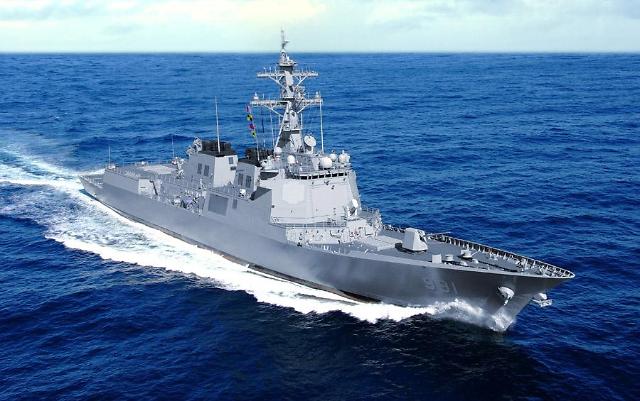 SEOUL -- South Korea embarked on the construction of three new guided-missile destroyers featuring an Aegis combat system. The new destroyers, which are 170 meters long and weigh 8,100 tons, can operate at a speed of up to 30 knots. Hyundai Heavy Industries will build the lead ship for delivery in November 2024.

A ceremony was held on February 16 at the shipyard of Hyundai Heavy Industries (HHI) in the southeastern port city of Ulsan to mark the beginning of construction. Compared to its previous Aegis ship, the first KDX-III Batch II destroyer would have enhanced capabilities to intercept ballistic missiles and carry out anti-submarine operations.

Along with tracking and other advanced equipment, it will be installed with a fuel-saving auxiliary propulsion system consisting of two 1.7 megawatts-class motors. HHI has completed basic design since signed a deal to build the first of three KDX-III Batch II Aegis destroyers in October 2019.

South Korea's KDX program calls for the construction of three classes of destroyers, starting with a 3,800-ton vessel commissioned in 1998. So far, 12 destroyers have been built, including three KDX-III Batch I Aegis ships armed with Hyunmoo-3C cruise missiles with a range of up to 1,000 kilometers. HHI built the lead ship of the 7,600-ton Batch I Aegis ship in 2007 and the third one in 2011.

The Batch II program aimed at coping better with North Korean missile and submarine threats requires more electrical power, a high level of automation and an improved combat system capable of detecting and tracking targets at greater distances and with more precision.

Separately, South Korea will build six KDDX-class (KDX-IV) stealthy destroyers by 2030. The 6,000-ton "mini Aegis" will have cruise missiles, advanced sensors, a missile defense system and stealth characteristics, all built with pure domestic technologies. They will use a new system that improves stealth capabilities, along with multifunction radars to detect missiles, aircraft and the surface of the sea at the same time.