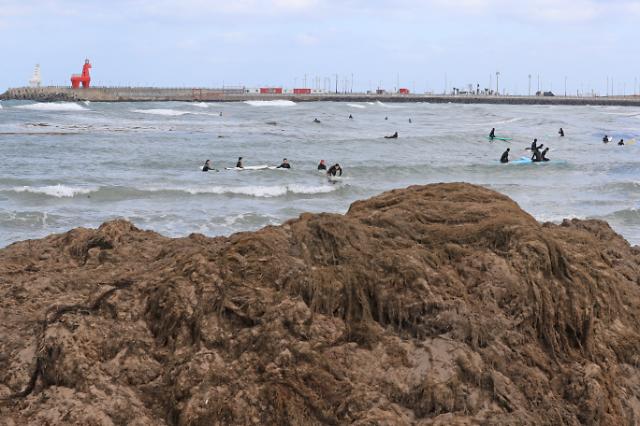 SEOUL -- South Korea coastguard and maritime officials are on alert to head off an unseasonal mass attack by sargassum horneri, a species of brown macroalgae called "devil weed" from China, which landed on southwestern coastal areas and drifted all the way to the southern resort island of Jeju after causing economic losses to sea farms.

It is an annual alga that is common along the coast of countries in Northeast Asia. It grows in early autumn through winter, becoming mature in spring, when the seawater temperature was 11.6~15.2 degrees Celsius. The species grows attached to a hard substrate and blooms into a kelp forest and drifts up the eastern coast of China towards the Korean peninsula as an invasive species.

It is detrimental to a foreshore ecosystem and started coming shore in South Korea in 2015 apparently due to climate change. This year, the invasion came two months earlier than usual on a grand scale, prompting maritime officials to wage an all-out war with the help of coastguard vessels, fishing boats and heavy equipment.

According to the Ministry of Oceans and Fisheries, South Korea collected 6,338 tons of sargassum horner in 2020. Only in January this year, some 9,018 tons were retrieved. Seaweed farms in the southwestern coastal region were hit hard.