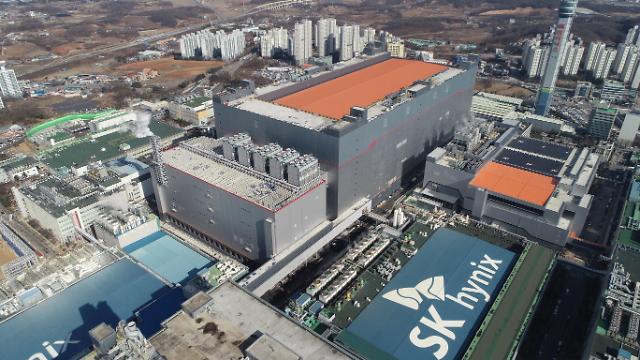 
SEOUL -- ASML Holding N.V., a Dutch manufacturer of chip-making equipment, will provide extreme ultraviolet light scanners under a five-year contract worth 4.75 trillion won ($4.29 billion) with SK hynix, the second-largest memory chip producer in South Korea. Scanners will be delivered by the end of December 2025.

Silicon-based round disks called "wafers" are coated with a light-sensitive substance and enter a scanner in which a laser light source is cast to create patterns of circuitries, which later are used for forming ultrafine, microscopically small structures. Extreme ultraviolet (EUV) light wavelengths are used to expose an ultra-thin electrical circuit.

SK hynix said in a regulatory filing on February 24 that it would secure EUV equipment to respond to the mass-production of next-generation chips. In February, the company opened a new plant to produce high-performance microchips. The plant at Icheon about 40 kilometers (25 miles) southeast of Seoul is dedicated to the production of dynamic random-access memory (DRAM) chips by using EUV technology.

SK hynix, a unit of SK Group, has aggressively bolstered its global presence with new investments to expand production facilities. Group chairman Chey Tae-won has vowed to build the world's largest semiconductor cluster in Yongin. Some 120 trillion won will be spent after 2022 to build the cluster that will house four fabrication plants as well as about 50 equipment, parts and material makers.

In October 2020, SK hynix signed a $9 billion deal to acquire Intel's NAND memory and storage business. The deal was aimed at securing a relatively stable and balanced structure as the proportion of DRAM will decrease to 60 percent and NAND will increase to 40 percent.