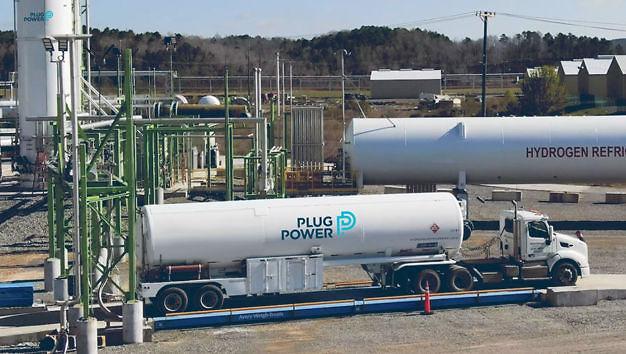 SEOUL -- A joint venture to be set up by South Korea's third-largest conglomerate SK Group and Plug Power aims to build a production base by 2023 and supply fuel cells and hydroelectric facilities to South Korea and other Asian countries. Plug Power is an American company that provides comprehensive hydrogen fuel cell turnkey solutions and operates a hydrogen highway across North America.

In an online ceremony on February 25, the group's holding company and Plug Power promised to seek cooperation with a state power company in the field of hydrogen production and fuel cell generation and establish cooperative relationships with commercial vehicle manufacturers to supply fuel cells for vehicles. The event came after SK made a $1.5 billion strategic investment in January to acquire a 9.9 percent stake in Plug Power and set up a joint venture this year.

Through the investment, SK aims to secure its leadership in the Asian hydrogen market, create a hydrogen ecosystem in South Korea and find new business opportunities in China and Vietnam. The group promotes hydrogen as a new growth engine. In December 2020, the group launched a task force involving group units such as SK E&S, an energy company involved in gas field development and power generation, to establish a hydrogen value chain covering production, transportation and charging.