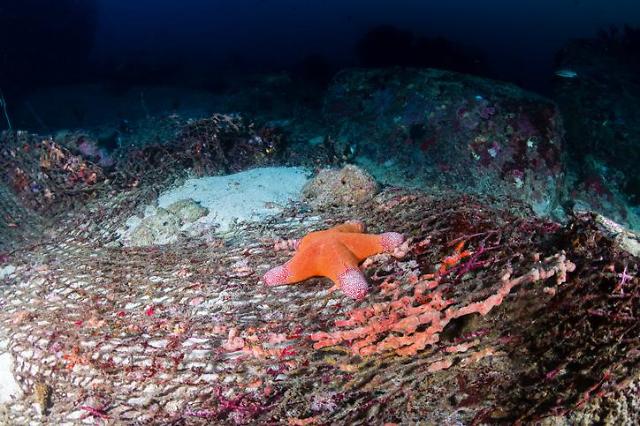 SEOUL -- South Korea will share know-how in biodegradable fishing net production with Kuwait to help the Middle Eastern country manufacture nets that can contribute to preventing marine pollution and ghost fishing, an aquatic phenomenon in which animals get caught by nylon nets that were abandoned or lost.

Ghost fishing by "ghost nets," abandoned or lost fishnets made of nylon, damage fish stock and vessels. Sometimes divers get caught up in ghost nets and lose their lives. Ghost nets can also destroy underwater habitats such as coral reefs and benthic fauna which are common spawning grounds for marine animals.

The Ministry of Oceans and Fisheries said in a statement on February 25 that the ministry and Kuwait's Environment Public Authority held a video conference and agreed to cooperate in the joint development and production of biodegradable fishnets. Using South Korea's experience and know-how, Kuwait would produce prototypes.

South Korea has focused on the research of biodegradable fishnets for over a decade. A project was launched in early February to popularize the use of eco-friendly nets by providing fishing gear to fishermen along with subsidies in a state pilot project. "We hope that biodegradable fishnets developed by South Korea will help Kuwait to prevent marine pollution and ghost fishing," Cho Il-hwan, a ministry official in charge of marine resource policy, was quoted as saying.

Cho said South Korea has accumulated know-how in the production of eco-friendly nets since development began in 2005. Biodegradable fishnets produced in South Korea are made of PBEAS, a novel biodegradable thermoplastic polymer. The replacement cycle of new biodegradable nets is about one year, which is shorter than that of nylon used for two years, but new nets are about 10 percent tougher and 20 percent more flexible than previously developed prototypes.