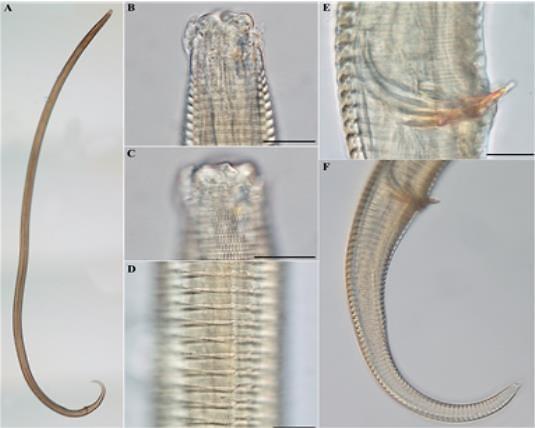 
SEOUL -- Researchers have found eight new species of roundworms as well as two other species that were not recorded in South Korea near Dokdo, a chain of rocky islets known as Liancourt Rocks, which are located in the middle of waters between the Korean peninsula and Japan. They think the newly-found species of roundworms play a vital role in the food cycle of a marine ecosystem.

In a joint research project in 2020, two state-run institutes, the National Marine Biodiversity Institute of Korea and the Korea Institute of Ocean Science & Technology, discovered eight new roundworms in marine sediments around Dokdo, the Ministry of Oceans and Fisheries said in a statement on February 26.

Two unrecorded species include a type of Urochodata and Salpa maxima that feed on single-celled animals such as bacterium and protozoa. The ministry said that researchers would publish a research paper through international scholastic journals to win international recognition of the novel species.

Dokdo is located where cold and warm currents meet. Because of environmental characteristics, the sea around it has a unique marine ecosystem that is quite different from those found along the east coast of the Korean peninsula. While it is home to some 95 species of seaweeds including kelps and sea mustard, the islets also feature some 90 species of invertebrates including sea urchins, starfish, and abalones.

Dokdo used to be a breeding ground for sea lions but the aquatic mammal disappeared in the 1970s due to a change in the marine food chain and overfishing.