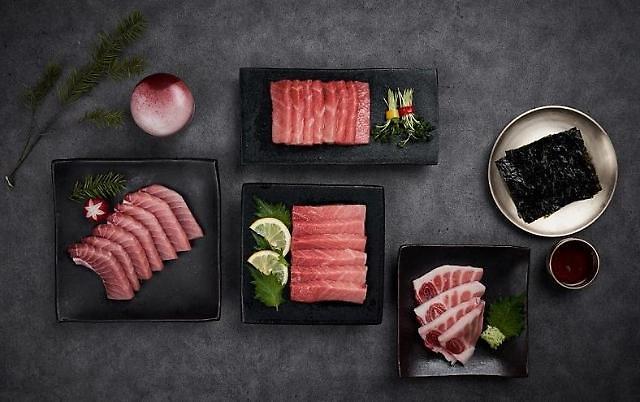 SEOUL -- In an effort to ride out a business slump caused by a COVID-19 pandemic, South Korea's major seafood retailer Sajo Seafood will launch a delivery service for tuna "Hoe," a raw fish fillet served in a Korean style.

Deep-sea fishing vessels catch tuna fish, a popular fish kind in Japan and South Korea, mainly in the Pacific Ocean. Bluefin tuna and yellowfin tuna are bled and gutted soon after they are caught off fishnets to go through a flash-freezing process. They are sold as steaks and raw fish meat. Smaller skipjack tuna or bigeye tuna are processed to be canned.

Tuna restaurants in South Korea are normally regarded as high-end diners operated by skilled chefs who can flawlessly thaw, cut, and serve the soft meat fish without damaging texture and taste. Because of such characteristics, delivery services are available to a limited number of customers who live near tuna restaurants with skilled chefs.

Sajo Seafood, which provides frozen tuna to restaurants, changed its business tactic to launch a home delivery service in March. A pilot delivery service will begin at Sajo's high-end tuna restaurant in western Seoul through popular food delivery apps. "By expanding our online retail channels, we will become the leading brand in the online tuna meat delivery market," Sajo said, adding that it would diversify its selling channel.

According to the Korea Foodservice Industry Research Institute, the COVID-19 pandemic dealt a serious blow to South Korea's offline foodservice industry. The average monthly sales of restaurants fell 16.5 percent on-year to 27.3 million won ($24,367) in 2020. Meanwhile, the food delivery service app industry thrived. According to government data, some 17.3 trillion worth of transactions were made via online delivery services in 2020, up 78.6 percent from 9.7 trillion won a year ago.