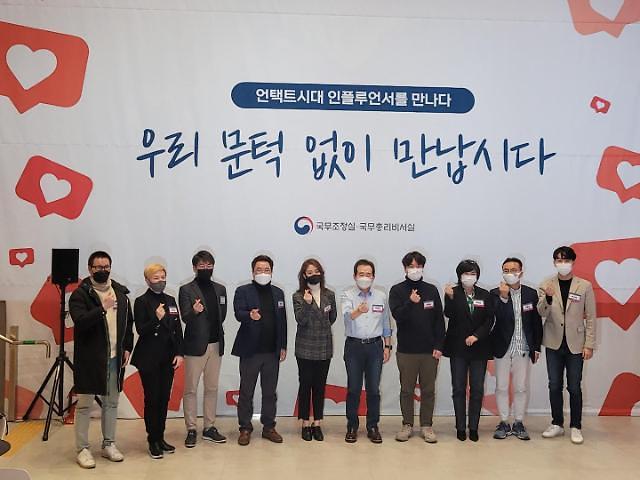 SEOUL -- "Honestly, I am not really good at social media or communicating with others because I am too busy with work," Prime Minister Chung Sye-kyun said as he introduced his experience in a national fight against COVID-19. The 70-year-old veteran politician played a pivotal role in South Korea's anti-epidemic campaign, working as the top commander of a control tower that collects and filters complex information before delivering a concerted message to minimize confusion.

Wearing a sky blue shirt, a pair of jeans, and a pair of sneakers, Chung spoke about his recent experience in communicating with people at a conference on February 26 at Sangsang Planet, a KT&G building for startups in eastern Seoul. Guests and participants responded to his cute confession with a big hearty laugh.

Unlike other social media platforms mainly based on texts and images, Clubhouse, a smartphone social media app, allows people to invite others to share ideas through verbal conversation. It is popular among young generations. "The Clubhouse app is the hottest thing right now, isn't it? I've tried it and it was very fun," Chung said, adding that Clubhouse is a channel for him to actively communicate with young people and propagate government policies.

"It's hard for me to meet with young generations in person. Through Clubhouse, however, I can meet hundreds at a time. It was a great experience for me," said Chung. He invited prominent influencers, who actively use social media, for diverse and wide communication. Officials in charge of digital communications at central and local governments were also present online.

CEO Lee Pil-sung of Sandbox, a social media content creator company in Seoul, YouTube channel MKTV head Kim Mi-kyung and Lee Sung-hwan who heads PPSS, an online media, were among nine influencers who participated in the event. It was designed to strengthen public sector policy communication in the digital era with the operation of "d-briefing," an open new media communication platform.

The prime minister introduced his on-site experience when he risked his life to spearhead a grueling field battle in the southeastern city of Daegu, the epicenter of a COVID-19 epidemic in South Korea. Ever since he has engaged in an endless fight with unfiltered information that confused South Korean societies. Some stories have been maliciously cooked to create mayhem, prompting Chung to carry out an important task of conveying correct information to the public. Fact-checks by medical and disease prevention authorities were also conducted.

The meeting came as South Korea embarked on a public inoculation program, starting with health care workers and patients aged under 65 at sanatoriums, nursing facilities and rehabilitation facilities. Before the conference was broadcast live via YouTube, Chung explained the concept of "d-briefing," which is part of the prime minister's project to create an open and borderless communication channel. South Korean reporters have been designated to each administrative organization, covering their own sectors. Chung designed the open briefing method to minimize the information gap between reporters and citizens.

Transparency and openness are the backbones of d-briefing. Information released through Chung's regular briefing will be tailored so that any South Koreans can understand its context and content. "Prime minister Chung Sye-kyun will continue to hold additional conference sessions with other influencers in the future," said Cho Sung-man, the head PR manager of the prime minister's office.