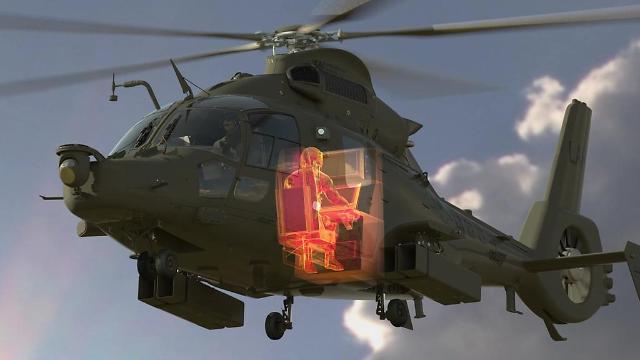 SEOUL -- Israel's suicide drone technology can be used for the development of a manned and unmanned teaming system using light attack helicopters produced by Korea Aerospace Industries (KAI), the sole aircraft maker in South Korea. Its goal is to provide a new air-combat system using loitering munitions for military requirements.

A loitering munition, also known as a suicide drone, loiters around the target area for some time and attacks once a target is located. The weapon enables fast reaction times against concealed or hidden targets and allows more selective targeting.

KAI said on March 4 that it has signed a memorandum of understanding with Israel Aerospace Industries (IAI) on cooperation for manned and unmanned teaming systems. Through the combination of KAI's aircraft technology and IAI's unmanned aerial system technology, they will seek to demonstrate an operation system combining loitering munitions and helicopters by end of this year.

Like other Israeli firms which have been key partners in South Korean defense programs, IAI has maintained business ties with KAI. "Combining IAI’s proven capabilities in loitering munitions and KAI’s technologies and products to create an opportunity for an improved solution to the future battlefield," IAI CEO Boaz Levy said in a statement posted on the website of his company.

KAI thinks that the combined operation system is cost-effective and can maximize combat effectiveness. The South Korean military has unveiled a scheme to utilize its home-made light attack helicopter (LAH) for various missions. "We will lay the groundwork for commercializing exports through the diversification of products and the creation of new demands by accumulating technologies," said KAI CEO Ahn Hyun-ho.

KAI has been involved in the development of an LAH project based on H-155, a twin-engine helicopter created by European aircraft maker Airbus. Development, which began in June 2015, would be completed in late 2022. KAI released an LAH prototype in 2018 for test and evaluation to assess its effectiveness and suitability for combat.

In December 2020, KAI said that the LAH prototype was provisionally judged fit for battle by the Defense Acquisition Program Administration (DAPA), a state arms procurement agency controlled by the defense ministry. The LAH carrying a 20mm machine gun and four anti-tank missiles or 70mm rocket pods has a maximum takeoff weight of 4.9 tons. It is capable of flying at a maximum speed of 324 kilometers (201 miles) per hour. KAI plans to attach "Cheongeom," a home-made air-to-ground missile that would replace TOW anti-tank missiles.