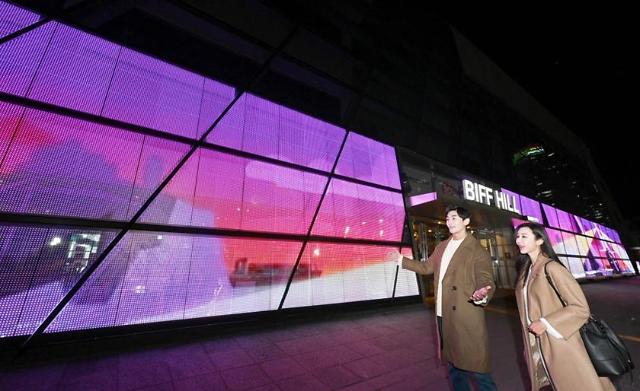 
SEOUL -- A transparent and thin LED (light-emitting diode) film produced by LG Electronics displays videos and images on the facade of the official venue of an international film festival in the southern port city of Busan. The installation covers an area of 206 square meters to create a colorful dynamic panorama.

The film installed at the Busan Cinema Center, which is a landmark in the port city, allows up to 73 percent of light to pass through, LG Electronics said, adding that when off, the window resembles an ordinary pane of glass. The film provides an excellent solution for settings in corporate and hotel lobbies, museums, event halls, galleries and shopping malls, without disrupting their original decor and spatial design.

The company provides a lineup of LED and OLED signage, transparent or not. Transparent OLED screens display black content as transparent, allowing designers to overlay digital content such as images, text and video onto real-life objects placed behind the transparent screen. LG Electronics suggests that transparent OLED can be widely used in various places such as hotel check-in counters, museums, subways, stores, self-driving cars and aircraft cabin interiors because they do not need backlights.