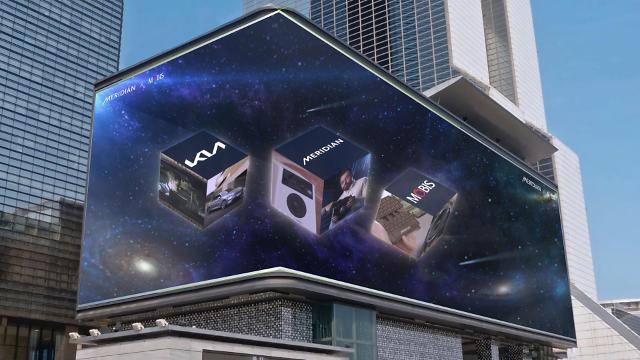 A Hyundai Mobis ad shows a premium sound system on a K-pop square in southern Seoul.[Courtesy of Hyundai Mobis]

SEOUL -- Hyundai Mobis, the parts-making wing of South Korea's Hyundai auto group, unveiled a premium sound system through a partnership with Meridian Audio, a British high-performance audio component and system manufacturer, with their sights set on the global automotive market.

The premium sound system was the result of joint development for two years, Hyundai Mobis said in a statement on March 21, adding it has played a pivotal role in designing speakers and amplifiers. The system will be used for K8, a Kia sedan to be released in the second quarter of 2021.

Hyundai Mobis has accelerated the development of sensors, cameras and other parts for autonomous vehicles and infotainment. "We will target the global market with high-quality products that combine Hyundai Mobis' infotainment technology with Meridian's innovation and craftsmanship in the premium sound market," said Hyundai Mobis global marketing head Lee Won-woo.

Starting with K8, Hyundai Mobis and Meridian aim to supply the premium sound system to various models such as electric vehicles, luxury cars and sport utility vehicles. They applied a combination of natural pulp and nanometal, with titanium material used for the speaker twitter, which is responsible for high-pitched sound, to provide clean and clear sound.

Meridian engineers have been invited for joint work on tuning audio optimized for K8, Hyundai Mobis said, adding both sides have implemented a balanced base that reflects the characteristics of premium sounds, the ability to play sound without distortion, and delicate expressions.

The K8 model is equipped with 14 speakers featuring advanced sound effects that compensate for volume and sound quality even in real-time driving speed changes and can configure the stereo sound space that the driver wants. Hyundai Mobis increased woofer output for excellent low-pitched sound regeneration.