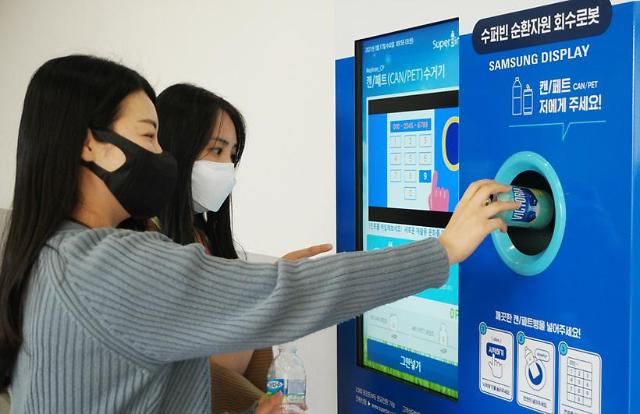 SEOUL -- Samsung Display, a major flat panel maker in South Korea, has set up smart collection boxes for recycling at its production base in the southern city of Asan. Built-in intelligent cameras recognize used cans and plastic bottles and automatically classify them by type.

Samsung Display said in a statement on March 21 that smart collection boxes were installed in 11 places in its Asan complex. Users can accumulate mileage depending on their use performance. They can be refunded in cash if they have more than 2,000 points.

South Korea has launched a campaign to boost the rate of recycling. Garbage is sorted by hand at each household before being placed outside for collection under a compulsory waste collection program. In January, Seoul began resting an artificial intelligence-based recycling robot that can autonomously sort cans and plastic bottles from garbage.

Samsung Display has recycled water used in the process of manufacturing displays through a purification system. The company used ultra-fine film filtration technology to re-clean water treated at wastewater treatment plants. Under an agreement with South Chungcheon Province, Samsung Display will transfer 20,000 tons of water per day to improve water quality in rivers or for use as agricultural water.