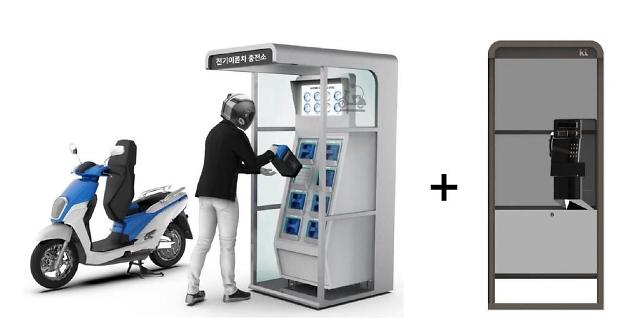 
SEOUL -- In an effort to reduce air pollution, a provincial government will use old telephone booths, which are hardly used, to establish a battery-sharing network for deliverymen who use motorcycles. Street telephone booths will be turned into charging depots where deliverymen can quickly replace depleted battery packs. Such a battery-sharing method is popular in Southeast Asia.

Food deliverymen in an urban environment travel a daily average distance of about 100 kilometers (62 miles). They shun electric motorcycles and scooters because they can only travel up to about 60 kilometers per charge. Emissions from fossil-fueled motorcycles account for 5.7 percent of total air pollution emitted by vehicles.

South Gyeongsang Province said in a statement on March 23 that it would work with DNA Motors, a motorbike maker, and KT Linkus, a battery-sharing platform operator wing of KT, to establish a battery-sharing network in urban areas.

"We will provide subsidies to delivery companies to promote the battery-sharing system," Park Mi-sung, an official at the provincial government's climate and atmosphere management team, told Aju Business Daily. The province would provide up to 3.3 million ($2,910) in subsidies each to 1,100 electric bikes.